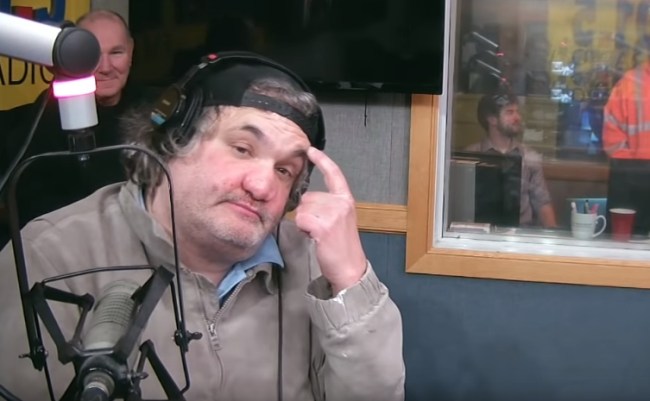 On Christmas morning, Artie gave the gift of a new photo of his misshapen nose. “This is it but I believe her nose had a septum and had not been hideously deformed due to over 3 decades of drug abuse,” Artie wrote on Twitter.

Artie Lange and his nose is a living, breathing anti-drug PSA.

The 51-year-old troubled comedian (Yes, Artie is only 51) appeared in Superior Court in Newark, New Jersey, two weeks ago. The former Howard Stern Show sidekick tested positive for multiple drugs including cocaine, amphetamine, benzodiazepines, and Suboxone (a drug used to treat opioid addiction). Lange told the judge that “heroin is out of my life” and he “wouldn’t be arrogant enough to come in here after using cocaine for two days.” Lange is currently serving four years of probation after pleading guilty to heroin possession, but the judge sparred Lange any jail time for now.

Everybody’s favorite Baby Gorilla tweeted out on December 14th that he hadn’t used heroin in 41 days and was trying to stop using cocaine, but admitted he fell off the wagon and “touched the flame.”

Guys I will tweet about this once. Today in court they drug tested me. For the last decade or more they’d have found both Heroin and Cocaine. With the help of in my eyes a miracle legal medication called Suboxen I tested negative for Heroin. I haven’t used Heroin in 41 days…

That’s a prison that for now I’m out of. It’s also the reason I’m not in jail. The judge and Prosecutor were unbelievably compassionate. I’m not high. So I see it clearly now. They wanna save my life. 10 days ago when I left rehab I had to touch the flame. I used Cocaine…

It should’ve left my system. But a higher power wouldn’t let. E get away with that. I’m a bad addict. I had to see if I could get high. It was awful. If ur on Suboxen don’t try it. So they are making me apply for a very strict rehab type program called Drug Court…

I have work to do. I feel now I can also stop Cocaine. But that’s arrogance and addiction. I’m accepting help. If I fail now I will go to jail. Jail is not for addicts. But I’d be giving them no choice. When I use illegal drugs I have to score them. That’s breaking the law-

Pray for me. So no lies. I have 10 days clean. I am not stupid. I know I got help from ppl who came to court w me who did so cause of my celebrity. And from an amazing Lawyer Frank Arleo who I can afford. Others aren’t as lucky. My charity fund is still a go. I won’t abandon u-

In 2017, Artie Lange told the story of how he accidentally snorted glass. Artie said he had ladyfriends all over the country, including this one woman in Boston who was “really beautiful.” She tracked Artie down at a gig and she “had coke on her.” They went on a “two-week run” where Artie took her on the road with him.

They were at the Four Seasons in St. Louis and she ordered $80 chocolate-covered strawberries from room service while Artie was in the shower. The woman also cut up oxycontin with a salt shaker, but it broke while she was cutting it up. According to Artie, the woman had no idea she accidentally cracked glass into the oxy. Then she went to the front desk to pick up a package. Artie allegedly came out of the shower and did the line with the broken glass in it. “It was like a zipper,” Artie remembers. “I looked in the mirror and I said, ‘Well now everything has happened.'”

Artie then went to a doctor to fix his destroyed septum and apparently the physician made it worse. “He ruined it. Now my nose is permanently attached to this side of my nostril and when I blow my nose it bleeds,” Lange said. Artie then went to a show in Pittsburgh the next day and his nose starts bleeding profusely during his standup routine and “looked like a Brian De Palma movie.”

Artie warned that nobody should do opiates. “If I could go back to the me that did heroin the first time, I would literally tackle him. I said to myself, ‘I’m in trouble.'” The moral of the story is don’t do bad drugs kids.

Let’s hope Artie can get his life together once and for all.