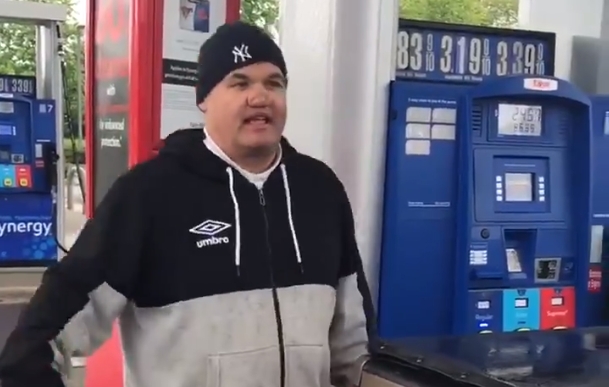 Artie Lange looks like he is finally taking rehab seriously and getting his personal life together. A new video has surfaced showing Artie working at a gas station in New Jersey as part of his rehabilitation program and he looks fantastic.

The 51-year-old comedian didn’t shy away from the camera as he was seen pumping gas in NJ. The Twitter account for the podcast Radio Misfits noticed Lange working at the gas station and did a quick interview with the comedian. The video was retweeted by Artie’s official Twitter account @artiequitter on Wednesday.

Artie, who recently starred on the HBO series Crashing, talked about his upcoming comeback and promised he would be back on stage performing stand-up comedy soon. “All right, now I’m pumping gas,” Lange said in the video. “I gotta pump gas for 10 more days and then I’m satisfying the program I think.”

Artie had a message for his former boss Howard Stern, “If this gets back to Howard, tell him I love him. I love him to death and I miss him.” Lange was the sidekick on The Howard Stern Show up until December of 2009 when he was fired for appearing on the radio show wasted and falling asleep during the broadcast.

Stern and Lange have had their differences since Artie was fired. In 2017, Artie said, “We hate each other’s guts. I became a heroin addict. I fell asleep on his show. That led to a fight and that’s what happens – then you go into rehab and, you know, they tell you, you lose friends.”

Recently, Stern had nice things to say about Lange. In an interview with the New York Times, Stern was promoting his new book Howard Stern Comes Again and said, “What’s happening with Artie makes me very sad. We’ve lost touch, and that’s my doing. I got my fingers crossed for the guy. And it wasn’t a clean break. It was many years of wanting Artie to get help.”

“I know that a lot of fans want me to talk about Artie and feel it’s a cop-out for me not to,” Stern said. “I’ll take that. I don’t want to do anything that would rock his boat. I get sad talking about Artie. He was a tremendous contributor. But we had to move on.” Maybe the two can reconcile their differences and Howard can buy Artie a new nose.

RELATED: Artie Lange Shares New Photo Of His Deformed Nose And Tells Story Of How He Accidentally Snorted Glass

Due to Lange’s drug court rehab program, he has been working at appointed jobs such as pumping gas and waste management. Artie’s Twitter account shared a video last month of him picking up garbage in New Jersey.

We heard from Artie this morning, HA! -> “It’s true i’m working to satisfy my drug court program. I work with great people. Nothing wrong with a little hard work. Love you all and can’t wait to be back on stage." pic.twitter.com/ZfwokhHBaD

Baby Gorilla has struggled with a decades-long battle with drug and gambling addiction. Lange was sentenced to four years of probation in June of 2018 after he pleaded guilty to possession of heroin when he was arrested in May of 2017 when he had 81 decks of heroin on him. In December of 2018, Lange tested positive for cocaine, which violated the terms of his probation. In January of this year, Lange was sentenced to nearly two weeks in jail and was enrolled in a drug court program.

Let’s hope Artie Lange is truly on the rough road to recovery and can make a triumphant comeback to stand-up comedy.