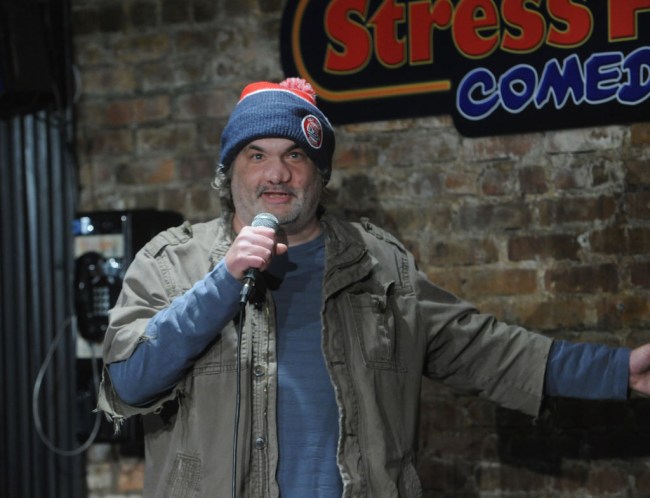 Artie Lange has not been shy about his deformed nose. The legendary stand-up comedian’s nose started garnering attention for being misshapen last December when he appeared at Superior Court in Newark, New Jersey for testing positive for multiple drugs including cocaine, amphetamine, benzodiazepines, and Suboxone. Artie has since poked fun at his deformed nose on several occasions on Twitter.

Great thing about the Cellar. It’s 2am on Thur & just got off stage. Place was sold out. NEw material working. Made gorgeous girl in front take my pic. But I’ve gotta face it – My nose is grotesque. I don’t look like David Beckham. I look like the ball he kicks around! pic.twitter.com/Sm7hRnguD3

In 2017, Artie Lange told the story of how he accidentally snorted glass. A woman was staying at Artie’s hotel room in St. Louis a while back. She was cutting up oxycontin with a salt shaker, but broke the glass in the process. Artie snorted the oxy with the glass shards and it completely ripped up the inside of his nose and he said it was like a “zipper.”

In the past, Lange blamed decades of severe drug abuse that started when Ronald Regan was President for his septum disintegrating. But last week the stand-up comedian told a never-before-heard story of how he was kidnapped and how the violent episode caused his nose to be even more deformed.

This week, Lange was interviewed by Jessica Pilot and Adam Kaplan for their podcast series titled Are We Still Talking About This. The former Howard Stern Show sidekick discussed everything from Louis C.K. to current day comedians to losing his 7,000-square-foot “F-U” house in Toms River, New Jersey because he lost money on the Washington Redskins.

The Baby Gorilla also addressed the 800-pound gorilla in the room, his disfigured snout. Artie tells the never-before-told story of how he was kidnapped because of his gambling habits. Artie said he is giving an exclusive to Jessica and Adam about how he got his smushed nose.

“The reason that I have this nose is of course is the abuse, I have no septum. I also owed a bookie $62,000. I still gamble a lot. That was my worst vice for a long time because it led to everything else. I’m the kind of guy that it just escalates. It just escalates the badness.”

Artie says that about 11 months ago, right before he went to jail, he was betting on sports. “I owed a bookie 62 grand, and a kid who worked for the bookie, we’ll call him African American, he was collecting and he thought I was a billionaire because he saw me on TV and he kidnapped me,” Lange said in the interview.

Lange said that he was walking to his truck near his Hoboken home and he heard someone call out his name. Next thing he knows, some kid literally knocked his lights out with one punch. “Knocked me out for like 10 minutes. I woke up in his van,” Artie claims.

Lange says the 19-year-old kid was a boxer who sparred at the Boy’s Club in Newark, New Jersey. The kid wanted to hold Artie ransom for the bookie. “His big plan was, 19-year-old kid. The bookie who I’ve known since I’m 12 years old, I knew his old man, whatever I just played bat with him,” Artie said. “He wanted to get 100 grand from the guy to get me back, because he knew we were friends. I said to the kid, ‘You gotta think this out. Like I’m friends with the guy. This guy, I don’t know anything about him, but I assume there’s people that make sure he gets paid. I’ve never had that problem. You’re just a kid. This is a dumb plan.’” The kid got scared and left Artie in his van.

Artie was questioned about the kidnapping, which revealed that Lange was betting, which violated his probation and he was arrested. Lange alleges that the bookie talked to Artie when he was in jail and he told him that the 19-year-old was “tuned up and we sent back to North Carolina.” Artie says that the “abuse from years of drugs and the hit broke it and destroyed his nose.” This photo in a tweet back in December of 2018, was probably around the time that Lange was assaulted.

Hey I got a quick message for u Ang. U ain’t the man. U run for the man. I fear nothing. pic.twitter.com/Sdn4BgSQzz

Artie explains why he believes that the media covers his tumultuous life. “I think I’m the only insane loser with drugs that’s even like a D-list celebrity, there’s nobody else,” Artie says in the interview. “In the old days, I’d be an average person. But now everyone is into the glutenfree sh*t so I’m kind of an anomaly. So I’m taking a lot of hits here.”

Artie said that he is “really looking at five years” in jail. “My life is chaos right now. I didn’t realize that I’m more famous for negative sh*t than I ever was for telling a joke. They cover me like I’m a Kardashian right now.”

“At 51-years-old, I thought I’d be less chaotic than I am now,” Lange tells Jessica. “I got a feeling that I’ll outlive everyone, that’s God’s plan. I’ll be here alone shitting myself in a colostomy bag.” On a positive note, Artie said that he is “insanely healthy” and just had a “big physical” that said “his liver is fine.” Let’s hope so.

Stay-tuned. It was so important to get to talk to the great Artie Lange this evening. I am grateful for having the opportunity. We have been friends for ten years now. He is who got me in this whole comedy business. ❤️

Artie tells the story of going on a comedy tour with a 29-year-old Mitch Hedberg. The two stand-up greats were performing Tuesday through Sunday night in Winnipeg in February. “I made $2,500 a week and Mitch made $5,000, and we both spent $7,000 on cocaine and we bought it from the guy who owned the club. At the end of the week, the guy is on an adding machine and he’s adding up the numbers for the week. And he goes, ‘Okay, you guys made a total between the two of you of $7,500 and you spent $14,000 on coke.’ So he needed 6,500 for the week.”

Artie and co-host Adam Kaplan then make a reference to the iconic Blue Brothers scene where Jake (John Belushi) and Elwood (Dan Aykroyd) perform at a country western establishment and run out on the bar tab after it was more than their band was paid to perform.

RELATED: Artie Lange Opens Up About His Struggles With Heroin After Getting Arrested For Drug Possession