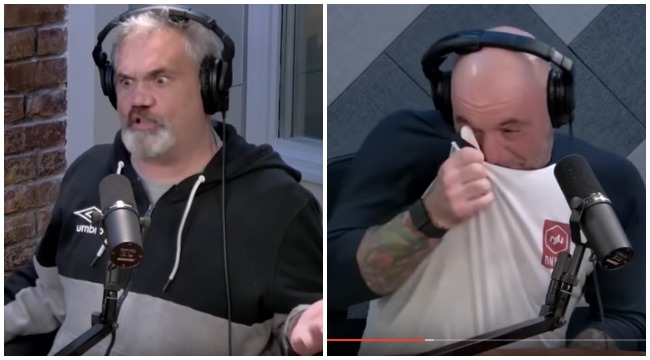 Artie Lange is nine months sober, and if you think his sobriety has negatively impacted his sense of humor, your opinion will change before you ex out of this tab.

Lange made an appearance on The Joe Rogan podcast and weaved between hysterical stories about all the drug-fueled shit he got himself into over the years and the enlightened, sober-minded perspective he gained from it all.

I highly suggest you listen to the entire one-and-a-half hour interview, but if you don’t have the time, I’ve highlighted a couple notable segments under the video posted below.

Half an hour into Lange’s set in Orlando, Florida, he realized he’s going to shit his pants in front of 2,000 people. This was brought on by dope sickness after Artie was unable to score drugs after touching down in Orlando, an extreme sport that Artie grew accustomed to while traveling.

Artie revealed that he was just going through the motions with his set because his mind was totally immersed in not shitting himself. He then bolted off stage and upon returning, told the crowd that he had to take a dump. The crowd was not pleased, not because he left in the middle of the set, but because he didn’t shit his pants on stage.

Artie Blowing The Most Money He’s Ever Made Doing Standup on Drugs, Hookers, and Gambling (25:00 mark)

Artie reveals that the most money he’s ever made doing standup was in 2007 during Super Bowl week at Mandalay Bay in Vegas. Two shows in one night, $70,000 a piece.

Artie says that on the plane back from Vegas, he starts to do the math on where the money went. Between the gambling, the drugs, and the hookers, he lost $145,000. Artie claims that when he got home, his accountant expected him to deposit the $140,000, but instead Artie told him that he needed the $5,000 make whole.

Artie Makes Rogan Cry Tears Of Laughter While Telling The Story About Greg Giraldo Owning Him So Hard (37:37 mark)

If you’re going to watch one snippet, make it this one.

Before the 2006 William Shatner Roast on Comedy Central, Artie ran into comedian Greg Giraldo at the airport. Greg shows up five minutes before the plane takes off and reveals to Artie that he’s tweaking from amphetamines and refuses to get on the plane. Artie talks some sense into him, gives him a couple Vicodin and a beer, and literally holds his hand and changes his seat to calm him down.

When they arrive at the Roast dress rehearsal, Giraldo, still freaking out, claims he’s going to go up and hug and kiss Farrah Fawcett. Artie, again, talks him out of it, effectively saving his career.

Back at the hotel room, Artie is sitting next to Giraldo like “Florence fucking Nightingale,” giving him hot compresses and support. The next morning, as the car is coming to take them to the Roast, Giraldo comes down to the hotel lobby with tears in his eyes and hugs Artie in a show of gratitude for helping him come down from the drugs.

At the Roast, Giraldo was the first roaster and the very first joke he delivers is: ‘Artie Lange’s here. How about a hand for Artie Lange….look at you Artie, you fat fucking drug addict.’

Artie On What Happened To His Nose