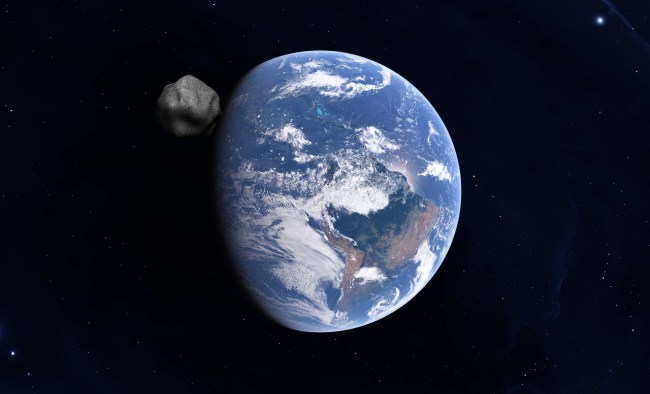 Amateur astronomers, Saturday night is your chance to get the rare opportunity to witness an asteroid fly close enough to our planet. A massive asteroid that is larger than the second-tallest skyscraper on the planet will do a fly-by of Earth tonight at 14,361 miles per hour (MPH).

Asteroid 2000 QW7 is estimated to be between 951 and 2,132 feet, according to NASA. To put that in perspective, the second-tallest building on Earth, the Shanghai Tower, stands at a towering 2,073. Thankfully, the huge asteroid will not collide with the Earth.

At 7:54 PM EDT on Saturday night, Asteroid 2000 QW7 will harmlessly soar past our planet at a distance of 3,312,944 miles, approximately 14 times the distance between the Earth and the moon. While that sounds like a far distance, on a cosmic scale, it is a very close proximity.

When the asteroid is the closest to Earth, it will be approximately eight degrees south-south-west of the bright star Fomalhaut. Amateur astronomers can use NASA’s Jet Propulsion Laboratory (JPL) HORIZONS website to obtain exact coordinates of the asteroid.

Despite the asteroid posing zero danger to Earth, NASA’s Center for Near Earth Object Studies is tracking the soaring space rock. Scientists will be studying the approach of Asteroid 2000 QW7 intensely to gauge if the space rock will hit the planet in the future, which there is a small possibility. Asteroid 2000 QW7 will continue to orbit the sun and will come back around Earth on October 19, 2038. Asteroid 2000 QW7 last visited Earth’s neighborhood in September 2000.

Another asteroid named 2010 C01, will fly by the planet this weekend, but will not come as close and is smaller, between 400 to 850 feet in diameter. Asteroid 2010 C01 will make its closest approach to our planet at 11:42 PM EDT on Saturday night.

“These asteroids have been well observed — one since 2000 and the other since 2010—and their orbits are very well known,” Lindley Johnson, planetary defense officer and program executive for the Planetary Defense Coordination Office at NASA, said in a statement. “Both of these asteroids are passing at about 14 lunar distances from the Earth, or about 3.5 million miles away, but small asteroids pass by Earth this close all the time.”

RELATED: Asteroid Will Come Alarmingly Close In 5 Years And A Chance Of Impact With The Force Of 1,500 Hiroshima Nukes