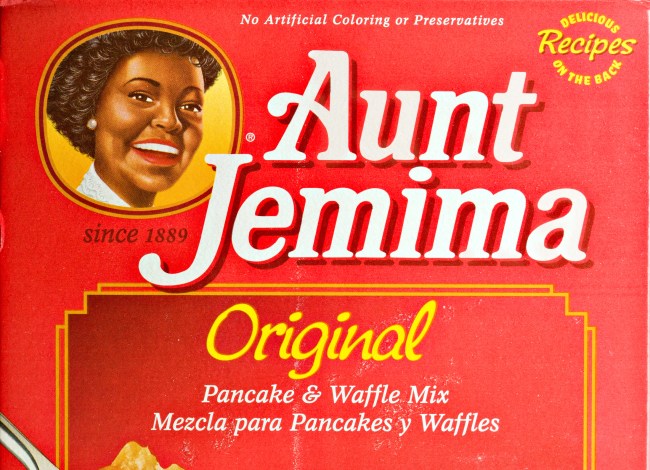 A day after a TikTok video by singer Kirby went viral, Quaker Oats announced the company would be dropping the name and logo.

Here’s the video explaining the brand origin and a little bit about the creator of Aunt Jemima.

NBC News reports the 130-year-old brand of syrup and pancake mix will debut new packaging in fall 2020 as the brand recognizes that “Aunt Jemima’s origins are based on a racial stereotype.”

The picture of Aunt Jemima has evolved over the years, with Quaker removing the “mammy” kerchief from the character to blunt growing criticism that the brand perpetuated a racist stereotype that dated to the days of slavery.

Quaker said the move is “an effort by the corporation to make progress toward racial equality.”

The company website also announced a $5 million donation over the next five years “to create meaningful, ongoing support and engagement in the Black community.”

A few years ago, my son had two friends sleep over. I made pancakes for all the kids and used real maple syrup.

His friends politely refused to eat the pancakes because they “tasted different” and we figured out the two brothers never had real maple syrup, only the high fructose shit from Aunt Jemima.

Twitter quickly reacted to the news that Aunt Jemima is effectively canceled.

JUST IN | After 131 years, PepsiCo is retiring the controversial brand name and mascot, Aunt Jemima, acknowledging that the brand is based on a racial stereotype. https://t.co/SVQDJ62oPv pic.twitter.com/72XFuYOh9R

This woman got Quaker to nuke its Aunt Jemima brand. All it took was a single TikTok video for a multi-billion dollar company (PepsiCo) to erase one of its most well known products.

Tell me how TikTok and Twitter aren’t inordinately powerful. pic.twitter.com/HApQvFUw8y

If you’re still using Aunt Jemima Pancake and Syrup you need to ditch them now.

Please switch to these Black owned Pancake and Waffle Mixes and Syrup Businesses.

I added some history on the racist past on the Aunt Jemima brand in the thread.

GOOD NEWS! Aunt Jemima has been canceled and racism is solved!!