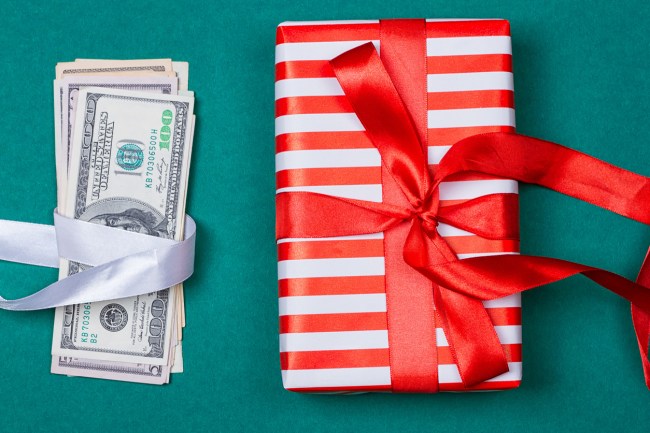 The holiday season is fast-approaching and you know what that means?! Time to get fat while our wallets get thin! YAY!

Last year, American shoppers spent a record $5 billion in 24 hours on Black Friday, which was half the amount my girlfriend guilted me into spending on her for Christmas. Evidently, I’m not the only one.

A study conducted by OnePoll found that Americans spend nearly $100,000 in their lifetime to celebrate the holidays.

The study examined the average spending of 2,000 Americans during the holiday season concluded that the average person spends $1,556 in a  preparing for the holidays and getting their homes ready for guests.

Broken down over a single festive season, the average American spends $235 on holiday home decor, $375 on holiday gifts, and $645 on other festive hosting essentials. [via NY Post]

Alongside our home spends, we’ll also spend a further $301 on food and drink during a single holiday season – with the average host estimating they entertain 10 people throughout the festive season.

$375 on holiday gifts. The months of November and December can account for 30 percent of a brand’s sales, according to the National Retail Federation. Retailers use shady tricks to get people to spend in these months, using a phenomenon like the “Christmas Creep,” where stores  starts blaring Christmas music over the loudspeakers at the beginning of November to hoax customers into spending. They also lead you to believe that deals are “time sensitive” to lure us into spending on particular days. Last year, Cyber Monday raked in the largest online shopping day in American history, hitting a record $6.6 billion.

Think before spending this holiday season bros. Does you lady really need another clutch?