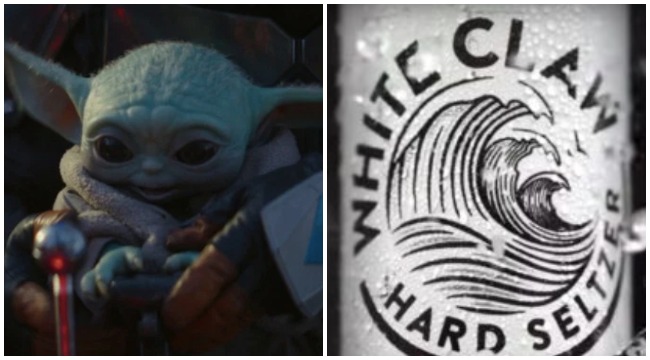 Close your eyes and tell me the first thing that comes to your mind when you read the word ‘millennial.’ Oh, it’s a picture of Brad drinking an acai smoothie outside a SoulCycle yelling at his father through his iPhone55 demanding he put more money in his account because his fine arts degree isn’t slapping like he thought it would?

To end 2019 I got a tattoo of Baby Yoda drinking White Claw.

This piece of artwork is as essential in telling the millennial story as a Kolbalt tool set and a pair of pleated khakis is to telling the Boomers’.

The video footage of the tat is poetry in motion…

Full disclosure, I’ve never seen one Star Wars movie but I’ve drank enough White Claws to get invited to Chet’s Nantucket house this summer while his parents are in divorce court, so I think that makes me a credible voice on the subject.

Plus, how can a human possibly resist taking this little guy home, wrapping him in a comfy blanket, and punting him like Jason Garrett on fourth and inches.

Anything you can do if in the force you believe. pic.twitter.com/xDzUvvkcC7