Mark Your Calendars: The ‘Bagel Guy’ Will Be Fighting… Lenny Dykstra! 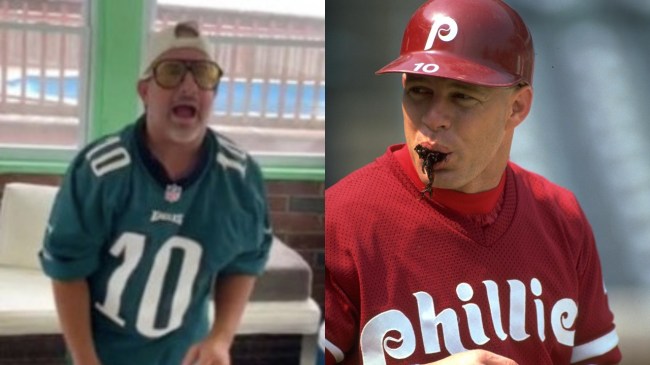 Before it became a Hot Girl Summer, it was firmly and unequivocally a Bagel Guy Summer.

The “Bagel Boss Guy” — real name Chris Morgan — was the story of the summer back in July after he went viral for having an absolutely unhinged meltdown about his height at a Long Island deli called Bagel Boss.

As I’ve said many times since, the Bagel Boss Guy video was one of the most viral clips that I’d ever seen in my 4 years of professional interneting, as it spread faster and further than almost any other video I’ve seen.

To his credit, Bagel Boss Guy Chris Morgan immediately capitalized on his 15-minutes of internet infamy, as he immediately began slinging Cameos for $50 a pop and signed a boxing contract with fighting promoter Damon Feldman.

Now, after a couple of weeks of MMA training with UFC fighters Chris Weidman and Al Iaquinta, Morgan has locked in who his opponent will be for his September 7th bout in Atlantic City: Major League Baseball legend Lenny Dykstra.

We’re told Lenny agreed to a deal and signed the contract on Friday (he’ll be paid a fixed amount of money for the fight) … and will begin training immediately for the September 7 bout in Atlantic City, NJ.

Sources close to Lenny tell us he ain’t worried about the lack of time to prepare … and is very confident he’s gonna beat the hell outta BB Guy. If he does … it won’t be cause [sic] Bagel Boss ain’t training hard for the scrap.

Morgan recently went to one of the best MMA gyms in the country … and training with UFC superstars Al Iaquinta and Chris Weidman. In fact, Iaquinta told us Morgan possessed some natural ability as a fighter.

Dykstra, a 56-year-old three-time MLB All-Star and former World Series champion, has fallen on hard times in recent years, having just been indicted for cocaine and methamphetamine possession last October.

While Dykstra is 11 years older than Bagel Guy Chris, the dude is still an utter wildcard that could likely do some real damage on the Bagel Guy, who appears to hover somewhere around five feet tall. If there are any sportbooks taking odds on this one, let us know, because I’ll promptly be laying down a paycheck on Lenny Nails.