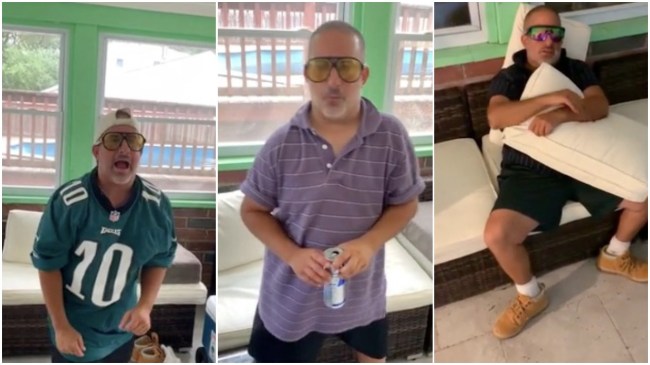 Thought Bagel Boss Chris’ 15-minutes of fame were up? Well, guess what my naive little internet friend, you were wrong, as not only is Bagel Boss Chris still making the social media rounds, but he’s actually making some fucking money off of his borderline psychosis. 2019, right?

Chris Morgan — who considers himself a “modern-day prophet” and a “modern-day Martin Luther King” — went viral a couple of weeks ago after having an emotional breakdown in a Long Island bagel shop called Bagel Boss.

To his credit, it was truly one of the all-time moments in modern social media history, as the video went viral almost faster than anything I’ve ever seen in my entire interneting life. And whether it be through a modicum of actual intelligence, outside advice, or sheer dumb luck, Bagel Boss Chris is wisely capitalized on his 15-minutes, as he signed a fight deal with promoter Damon Feldman.

Unfortunately, it pains me to report that Bagel Boss Chris’ ventures don’t end in Atlantic City, as he’s now on the paid-shout out app Cameo doing all sorts of uncomfortable shit that’s arguably harder to watch than his bagel store melts downs.

A horror show, I know. Even worse is that he’s charging $50 per Cameo, which is more than Darren Rovell, Juan Pablo Montaya, Ryan Cabrera, Perez Hilton and is equal to the price of an Enes Kanter or Tomi Lahren cameo (what a wonderfully weird app this is).

Just goes to show that with the right amount of shamelessness you can turn your 15-minutes of internet fame into a solid 30 minutes.

If you fancy yourself a masochist, the rest of Bagel Boss Chris’ Cameo videos are equally as troubling if you want to spend another 15 minutes making yourself squirm in your chair.