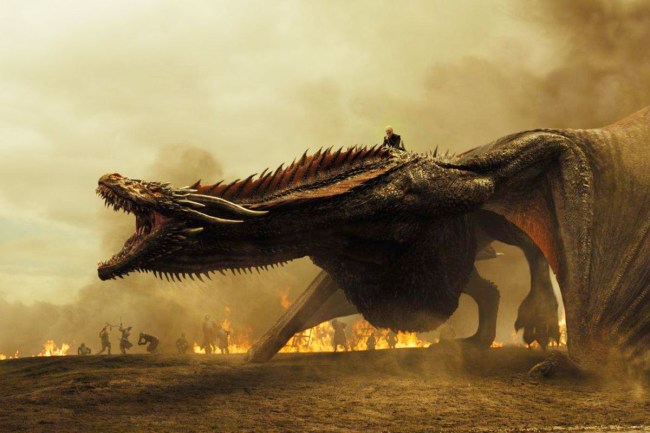 Spoilers ahead. Director Matt Shakman made his “Game of Thrones” debut on Sunday and what a fucking debut it was! It was quite the performance since Shakman is not known for directing action scenes, instead, he is known best for directing 44 episodes of “It’s Always Sunny in Philadelphia,” which is no knock on him because Episode 6 “The Gang Saves the Day” in Season 9 had a tremendous fighting scene featuring Mac destroying dozens of Yakuza ninjas. Shakman gave an interview to the New York Times where he explained what movies inspired him visually for that epic fiery battle in “The Spoils of War.”

The exciting moment of the episode came during the “loot train attack” where it appears to be influenced by Western movies such as “The Great Train Robbery” or “Butch Cassidy and the Sundance Kid,” except Daenerys Targaryen was riding a dragon that scorched the Lannister army and the Dothraki horde finished off Jaime Lannister’s troops while charging on horseback. “It’s definitely got a bit of that western feel, but then you throw dragons in on top of that,” said “GoT” showrunner David Benioff.

“So what I looked at more were things like ‘Apocalypse Now,’ the helicopter attack on the village, which felt very similar in terms of shifting points of view and the horror on the ground,” Shakman said. “Dealing death from above — going through swirling clouds of smoke and napalm and all of that — felt much more like what I was trying to create.”

“I looked at ‘Saving Private Ryan,’ the opening battle on the beach, where the sound drops out and Tom Hanks is watching men being burned alive and shot to death,” the “Game of Thrones” director said. “That to me was very much what it should feel like for Jaime, watching men die left and right around him.”

“I looked at John Ford. I looked at ‘Children of Men,” Shakman continued. “Bronn running through the field of horror was very similar to some of those Clive Owen oners [single continuous shots] as he’s running through hell with death all around him. I looked at a lot of different references and did what I could to pull from them as inspiration.”

YouTube user and video essayist Nerdwriter1 took Shakman’s interview as well as other information to create this fantastic video that sum up the spectacular video. Shakman also revealed if Ed Sheeran was killed in the last fiery episode of “Game of Thrones.”