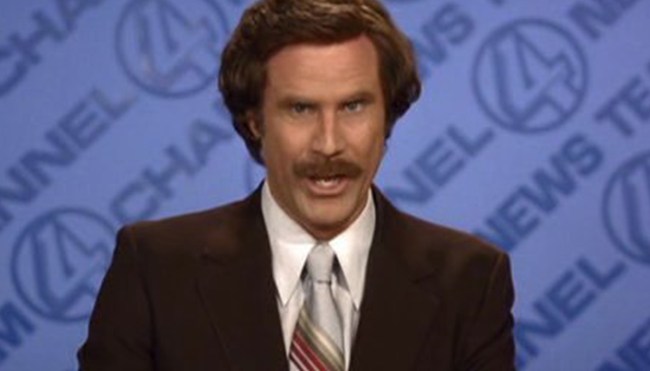 The first decade of the new millennium was filled to the brim with blockbuster comedies that have since cemented themselves as classics, the bulk of which starred members of what was eventually dubbed “The Frat Pack” who frequently collaborated with a collective of creative minds including Judd Apatow, Todd Phillips, and Adam McKay.

A good chunk of those films featured Will Ferrell doing what he does best, and I’d argue none of them have aged as well as Anchorman: The Legend of Ron Burgundy, where the Saturday Night Live alumnus portrayed the eponymous San Diego newsman with a love of scotch, a glorious mustache, and an impressive collection of leather-bound books in an apartment that smells of rich mahogany.

Anchorman‘s legacy can be traced back to both its perfectly dumb absurdism and infinitely quotable nature, as it’s one of those movies a lot of people reference on a fairly routine basis more than 15 years after its release—including one actual anchorman who capped off an era his career that spanned more than two decades with the perfect tribute.

On Sunday, British journalist Andrew Marr appeared on his final BBC broadcast after 21 years at the network. While closing out the program, he said, “I have been so lucky and so privileged to share so many Sunday mornings with you…I have been wondering how to close this final show, but I can’t do better than quoting my great mentor: ‘You stay classy, San Diego.’”

In a perfect world, he would’ve gone with the slightly more profane version of the quote that got a teleprompter-reliant Burgundy fired from his gig, but it’s still a fantastic move.