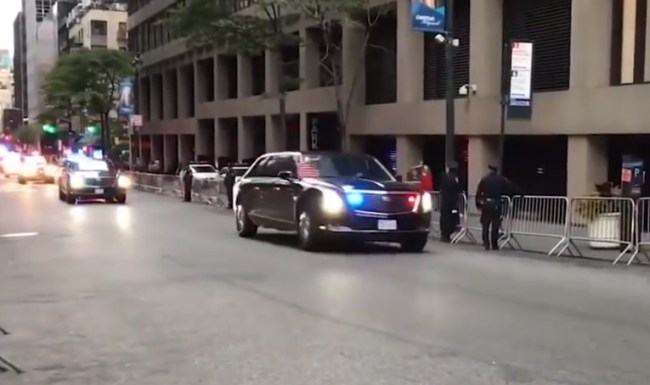 President Donald Trump got a new ride last week when the newest presidential limo arrived. The President’s special vehicle is known as “The Beast,” “Cadillac One”, “Limousine One”, and “The First Car” is highly customized for the leader of the free world so don’t expect to run down to your local Cadillac dealership and snatch one up.

The armored Beast has some nifty features including run-flat tires, doors that are one foot thick (that’s thicc), five-inch-thick bulletproof windows, state of the art communications system, oxygen tanks in case of a chemical attack, firefighting equipment, life support machine, and blood on board that matches the President’s blood type. Plus the vehicle has front-mounted tear gas cannons. The Cadillac One is said to have a price tag of $1.5 million. That’s for one car, not a fleet of them.

President Trump, as seen from Marine One, arrives in New York City for #UNGA pic.twitter.com/p6ZVoamnaS

The limo looks like a car on the outside, but on the inside the Beast boasts a diesel engine and transmission that are used General Motors’ rugged heavy-duty commercial vehicles. Despite the massive size and weight of this limousine, this vehicle has got some giddy-up.

The new presidential limousine, which is code named “Stagecoach,” features the same 2+3+2 seating layout as the previous models. The previous model was retired after 10 years of service.

General Motors began working on the new presidential limo back in 2013 and finally made its debut last week. “We’ve completed our task and we’ve handed over the vehicle to the customer,” Cadillac President Johann de Nysschen told Fox News.

The first version of the Beast was “designed from the ground-up by an R&D arm of General Motors in Detroit to meet Secret Service specifications.” The “car” was built on the chassis of GM’s full-size SUV, the same found on the Chevrolet Suburban, GMC Yukon, and Cadillac Escalade.

Despite the enormous price tag, the Beast has had some problems in the past. In June of 2007, the custom Cadillac DTS limo broke down in Rome while transporting President George W. Bush, who ended up walking to the nearby U.S. Embassy. The Beast often travels with the President when they go overseas and is flown in by a C-17 Globemaster transport aircraft.

The Beast is said to weigh 20,000 pounds, so it doesn’t get great gas mileage — about 8 MPG. With all that weight, the limo also doesn’t do well on ramps. In May 2011, the spare decoy Beast for President Barack Obama got stuck going up a ramp leaving the U.S. embassy in Dublin.

In March of 2013 the Beast broke down again, but this time it was human error. While Obama was in Israel, someone filled up the vehicle with regular gas instead of diesel fuel.

Because of its size, Beast isn’t great at turning around.

Journalist Brian Williams took a ride in the previous presidential limo to get burgers with Obama.