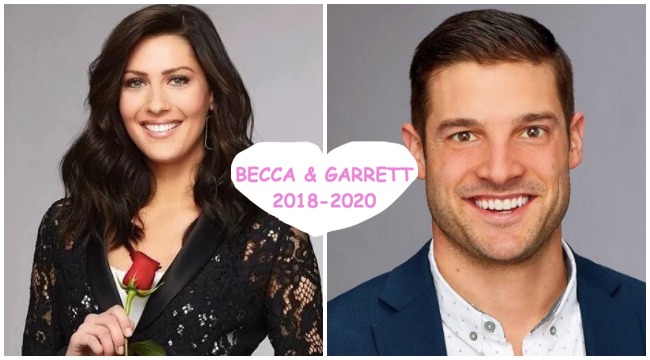 The Bachelor is a great show because you can witness two people get married the morning after one of them does intercourse with someone totally different and we all just tacitly accept it and my girlfriend starts crying and I’m like “he was literally just at Kelsey’s bungalow what the fuck” and life passes us by until we die.

Anyone who watched Becca Kufrin choose Garrett to be her husband knew that Becca wasn’t leading with her heart.

She, like millions of other heartbroken women, fell for the facade of a prominent jaw line. Sexy and alluring, but hallow and misleading. Strong jawlines are the Floyd Mayweather of facial features because they’ve never been beaten.

.@enews is reporting that Becca & Garrett have officially called off their engagement.

That puppy looks like it comes with a free portfolio consultation with Fidelity.

Two years of Becca’s life wasted because she fell victim to a Country Club Chin when she could’ve picked the other guy and moved to *checks notes* Buffalo.

She simply did not make whole on the promise she made to herself going into this about following her heart and became intoxicated with the Official Chin Of A Conflicted Cop.

And ultimately that’s what drove them apart.

In recent weeks, the reality TV stars were the subject of split rumors after Becca revealed Garrett’s social media support for the “Thin Blue Line,” a pro-police slogan associated with the Blue Lives Matter movement, had caused a rift in their relationship.  [via E!]

No one is to blame for the couple’s split.

Turns out, you can’t wade too deep into the crevasses of social theory when you’re constantly being interrupted by the insecure guy in the house who’s getting too wasted and threatening to drown himself if he doesn’t get a rose.

I guess it is true what they say…

**It’s better to have loved and lost, than to have never have lived in Buffalo.**