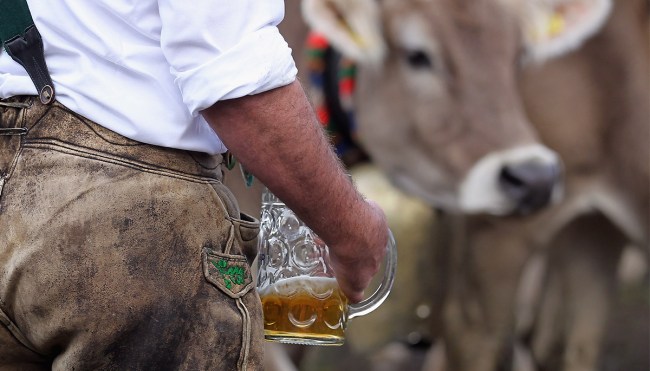 By now, you’re probably aware rising global temperatures and the many ramifications of climate change have put humanity in a fairly precarious position as the world braces for a future where major cities could become submerged by water by the time 2050 rolls around—which could possibly occur around the same time society as we know it collapses upon itself.

It’s certainly not the most ideal situation, but there are legions of scientists exploring potential strategies to mitigate the damage. Some ideas—like blocking out the sun—may seem slightly unrealistic, but there have been plenty of less drastic strategies experts have discovered that have the potential to help.

A number of breweries have taken steps to decrease their carbon footprint in recent years, and based on some new research, beer could actually play a fairly significant role in combatting climate change—with a little bit of help from the world’s cows.

The cattle industry is responsible for around 40% of the world’s annual methane output courtesy of the amount of gas emitted by the 1.4 billion bovines who spent a solid chunk of their existence producing it by burping and ripping farts. Scientists have figured out ways to reduce those contributions via selective breeding and changes to their diet, and it appears there’s one key ingredient in the brewing process that could make a big difference if added to their feed.

According to a study that was recently published in Frontiers in Animal Science, the leftover yeast used to make beer has shown a fair amount of potential when it comes to suppressing the microbes responsible for methane production in cattle.

After adding the yeast to cow feed, researchers found it reduced methane output by 25%, which was comparable to the impact of a comparatively expensive synthetic antibiotic called monensin some beef producers harness for the same purpose.

You can read a more in-depth breakdown of the science here, but the yeast used to make beer is particularly effective due to the properties it develops after interacting with hops—specifically the humolones and lupolones that “are both biologically active molecules that inhibit certain bacteria and other microbes.”

It might not be a magical fix for everything that currently ails the climate, but it certainly sounds promising.