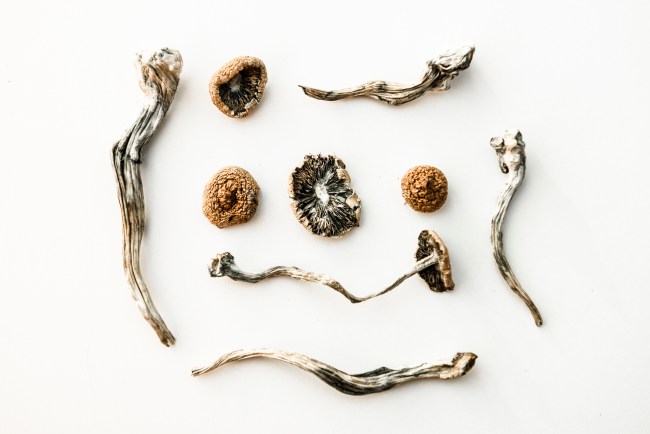 There is no denying that most of us have become drones of society. We’re stuck in a rut, dull as drinking non-alcoholic beer, and we exist each and every day without so much as feeling anything but the shithouse of misery that we’ve created for ourselves. Nah, man, we’re too busy waking up early every morning, putting on the same old boring britches, getting fat on KFC’s fried chicken and donut sandwiches and squeezing out those regularly scheduled dumps to take on the world in a way that isn’t the equivalent of boning it through a hole in a sheet. We’re fucking numb to the pulse of the Universe, and it’s laughing at us. Mmmwwahahahahah. And if you listen closely, I mean really close, you’ll hear the sound of life passing us by at shit-whipping speeds.

It means in a matter of decades – maybe even less – the mundane existence that most of us have come to accept as “just the way it is” will come crashing down on top of us in the form of cancer, a massive heart attack or some devastatingly horrendous accident. And then, guess what? Yep, that’s that. It’s all over, pal. Please send our regards to whatever sadistic beast is up there in outer space running the show. And then, kindly tell it to go fuck itself, will ya? Because, as legendary author Stephen King so eloquently put in his novel Pet Semetary: “Life sucks, then you die.”

It is to be considered that only those who believe that we’re all coming back to Earth as cute, cuddly kittens or some shit find solace in the tragic ends of humanity. Still, for those of us who don’t buy into all of that St. Easter Claus, holy Jeebus and his band of cookie-making elves gobbledygook – not one line of its fairy tale lunacy — there’s only one way to explain our unique position. We’re freaked out, scared, and, goddamnit, we desperately want something more from the time we have left in this place.

Well, kids, today you’re in luck. We’re going to share with you one sure-fire method for obtaining some semblance of spiritual growth, clarity and an all-around feel-good nature that you’ll have to relish in until the time comes to con St. Peter into letting you take a holy shit beyond the pearly gates. Are you ready for this? All…you…need…is…drugs. I think it was The Beatles who said that. Yep, all you need is drugs. But not just any drug will do.

Let’s face it, it’s not likely that any of us are going to become more in tune with our rotting souls by snorting rails of cocaine off the back of a toilet seat in some dive bar. It’s just difficult to imagine, you know, that spiritual enlightenment and whatnot can be found smoking meth off a piece of Reynold’s Wrap in a muddy alley. I mean, go ahead and try it, if that’s your thing. We’re just saying, don’t be surprised if the only light you see is the one blinding you in the emergency room while a nurse named Patty Joe inserts a catheter into your dong. It’ll be like she’s trying to tap a soda lid with one of those eco-friendly straws. And it’s going to hurt reaallllllll fucking bad!

No sir, not just any old mad science concoction is going to lead the bros of humanity to the promised land with a shit-eating grin plastered all over their faces. You know, one that says, “Hey boss, I gave life a savage fucking, and some of its back hair is still stuck in my teeth.” That’s the message we want to take to the great beyond and, according to science, all we need to do that is a little psychedelic voodoo.

Researchers at the Copenhagen University Hospital Rigshospitalet say open-mindedness and finding one’s inner hippiedom can be had by simply taking a single trip on magic mushrooms.

To come up with this theory, they dosed a group of healthy individuals, those who had never taken psychedelics before, and then asked them a slew of questions. Most of the participants reported having a “complete mystical experience” that transcended both time and space. The others were presumably curled up in a corner somewhere rambling on about how the red light in the smoke detector was a surveillance device installed by the government or sperm mutating aliens.

But it wasn’t until a week later when these people seemed to gain a new perspective on life. In the Journal European Neuropsychopharmacology, researchers explained that the subjects eventually became more mindful and showed an overall openness towards new experiences. They also got more creative and curious about things like life, death and the meaning of it all. All of which continued for the next several months, the study shows. Essentially, researchers believe that psilocybin helped these people reach a meditative state that is not dissimilar to the ways of Buddhism. But instead of having to learn proper breathing techniques, the drug gave them the ability to go deeper by diddling a specific serotonin receptor in the brain known as 5-HT2AR.

In other words, psilocybin appears to awaken the little hippy that lives inside all of us and lets him hacky sack his way into uncharted regions of our minds, showing us all sorts of cool real estate that we otherwise wouldn’t know was there. I suppose the moral of this story, if there is one at all, is that all of us should experience psilocybin at least once while we are roaming around on this hellish planet.

Because, who knows? It might assist us in finding something more productive to consume ourselves with instead of fast food, politics and viruses threatening to render us extinct. It might even lead us outside the scope of car payments and retirement plans, allowing us the freedom to live in the now rather than planning for a day that may never come.

And perhaps more importantly, we might find a path to all of the secrets of the Universe and maybe someone, somewhere will discover a loophole that allows us to vote out the bastard who’s been in charge for the past several billion years. Because if there is one monster out there that is even more destructive, dangerous and dumb than our nation’s leaders right now, it’s that asshole.