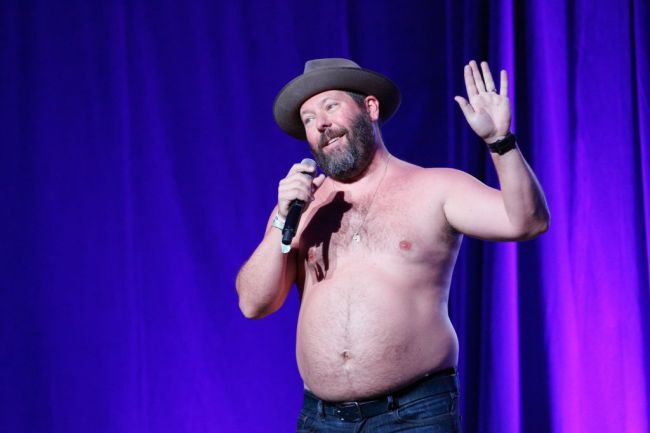 Bert Kreischer is a hilarious comedian who is best known for his legendary story dubbed “The Machine.” Hollywood is finally turning Kreischer’s unbelievable and viral story of pounding vodka with gangsters on a train in Russia while studying abroad when he was attending Florida State University.

The movie based on Kreischer’s incredible tale will be adapted into a movie by Legendary Pictures Productions and will star Mark Hamill AKA Luke Skywalker. The iconic Star Wars actor will play Kreischer’s father in the movie.

“The film is inspired by the stand-up routine and sees the events of the story catch up with the comedian 20 years later when he and his father (Hamill) get kidnapped by the people Kreischer wronged,” according to The Hollywood Reporter. “The film is described as The Hangover meets Midnight Run and will film in Serbia. Kreischer and Judi Marmel are producing.”

Peter Atencio, who is known for Key & Peele and Keanu, is producing and directing The Machine movie.

Kreischer and Hamill teased the upcoming movie on Twitter with video sketches as they board a private jet to Serbia.

Kreischer is the host of Bertcast on All Things Comedy network, Bill Bert podcast with Bill Burr, and co-host of the 2 Bears, 1 Cave podcast with fellow comedian Tom Segura. Kreischer has starred on FX TV series Hurt Bert, Bert the Conqueror, and Trip Flip on the Travel Channel.

Coincidentally, this is not the first movie based on Kreischer’s life. He was named as the “top partyer at the Number One Party School in the country” by Rolling Stone in 1997. The article was the inspiration for the 2002 film National Lampoon’s Van Wilder that starred Ryan Reynolds.

RELATED: People Are Calling For Gen X To Save America From Cancel Culture – But Generation X Doesn’t Care

RELATED: Watch The Trailer For Bill Burr’s New Comedy Central TV Series That Will Find The Next Great Stand-Up Comedian