Don’t Want To Be An April Fool? Here Are All The Online Pranks You Should Avoid Falling For Today 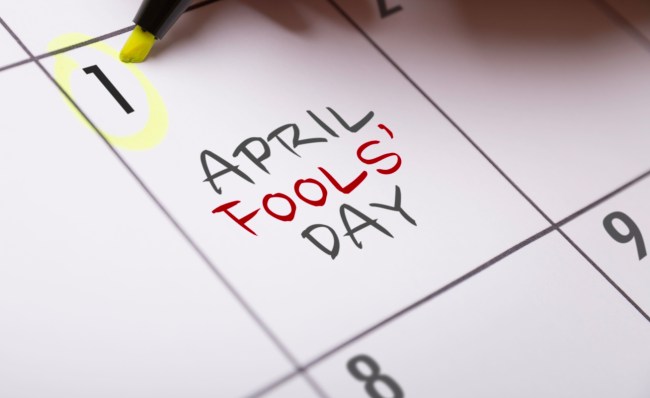 Today is April 1st, which means I rolled out of bed this morning and did what I do every time a new month rolls around: blast some Bone Thugs-N-Harmony on repeat.

A tradition unlike any other.

Once that was out of the way, I began my daily journey around the internet to help bring you the content you crave and came across a disproportionate number of stories that seem too weird to be true before realizing the reason why: it’s April Fools’ Day.

It’s virtually impossible to navigate the internet on April Fools’ Day without getting Fake Newsed at some point, and while I enjoy a good goof every now and then, there’s only so many pranks I can take before I start to go insane.

As a result, I’ve decided to do everyone a solid by rounding up a bunch of April Fools’ Day stunts so you don’t look like an idiot for earnestly sharing a link to a fake story.

For those mortifying moments when a surprise 🍆 or 🍑 makes you 😳… pic.twitter.com/eM9rQ6LNFi

Google hasn’t invented a talking flower (at least not yet)

Roku hasn’t invented a remote your dog can use

First comes love, then comes marriage!👰 For everything in between, there's Furever Weddings by Petco, where we handle the small details so you can celebrate their big day. Learn more about our new pet wedding services coming soon via the link in our bio! #FureverWeddings #Petco

We don’t yet know why only certain joeys are blessed with such incredible fashion sense, but we’re sure little April here is the envy of her friends. #seeaustralia #wildlife #australia pic.twitter.com/FJUDwdRk9E

Timex isn’t adding a 25th hour to the day

REEF (sadly) isn’t making a fanny pack for your sandals

Led by Chief Ambassador Bear Grylls, 12 Explorer Scouts will be ready for liftoff in April 1, 2021. 🚀 https://t.co/cXd1BaTigz

Mr. Potato Head isn’t getting replaced by an avocado

Of course, these are just some of the many pranks making their way around the internet today so remember: if it sounds too good (or too dumb) to be true, it probably is.