The Best Cocktails To Pair With Oysters – 8 Unique Suggestions 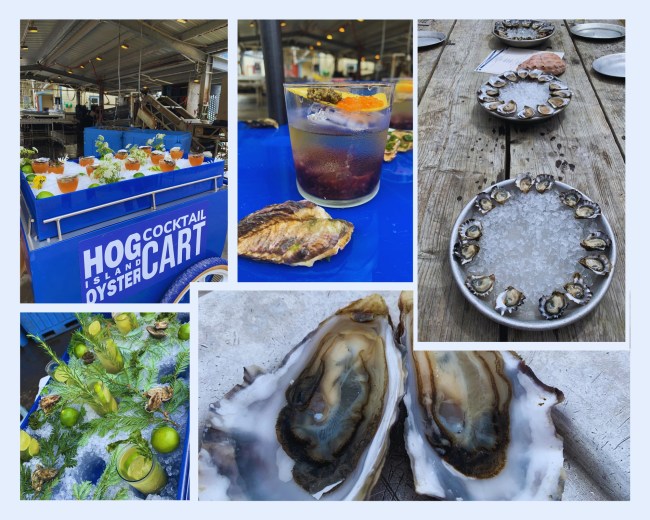 “Let’s go out for oysters.”

That magical phrase is a provocation for a great evening out. There’s nothing quite like slurping the night away at the local oyster spot, toasting with delicious bivalves and booze.

These days, oysters don’t always have to be a night on the town. Nor does it have to be a big hassle, either. Sure, they’re great for special occasions and indulgent evenings out, but there are plenty of places to order fresh oysters online and DIY your oyster night. Just have them overnighted to your house on ice, ready to shuck.

For example, suppliers like Hog Island Oyster Company ship farm-to-table oysters from their various oyster farms on the California coast. Their seasonal varieties of oysters are some of the most beloved among mollusk-heads, including their legendary Hog Island Sweetwaters, Hog Island Kumamotos, Salazars, and Dukes Of Topsail.

Maybe you’ve seen Hog Island oysters at your go-to fancy oyster joint. I recall seeing them all the time on menus in New York City, celebrated for their quality.

And rather than dishing out $18 a cocktail, you can save some bucks by channeling your inner mixologist at home. Just know that some adult beverages go better with oysters than others. 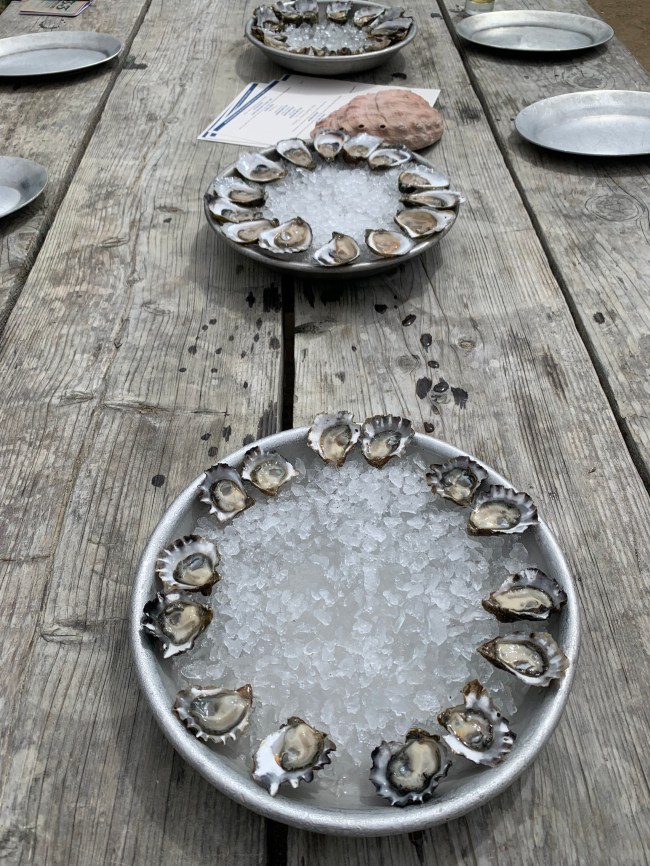 Oysters and cocktails go together like apple pie and ice cream. Jimmy Buffett wasn’t lying when he wrote “give me oysters and beer for dinner every day of the year and I’ll feel fine” in “Tin Cup Chalice” off his landmark 1974 album A1A.

The crispness of a crushable beer, of course, beautifully washes down the saline brininess of fresh oysters. There are few things I love more than an icy cold beer with a dozen oysters-on-the-half shell staring at me from the chill mold.

You can also get down with white wine, like an acidic Sauvignon Blanc, to make an oyster’s oceanic flavors pop.

But what about the harder stuff?

A couple of weeks ago, I flew up to Northern California to spend an afternoon at Hog Island Oyster Company, on the brisk Pacific waters of Tamales Bay in Marin County.

My goal for the trip, as an intrepid seafood-loving lifestyle writer: To discover the ultimate oyster-and-cocktail pairing. All the libations were created with liquor from Humboldt Distillery, which boasts the title of California’s best-selling organic vodka.

Though relatively unknown outside the Golden State, Humboldt Distillery‘s flagship organic vodka has piled up all kinds of industry accolades over the last couple of years. In 2019, for example, it won Spirit of the Year and Vodka of the Year with a Double Gold medal at the Bartender Spirits Awards in San Francisco – a remarkable achievement when judged by the best bartenders and bar managers in the world. 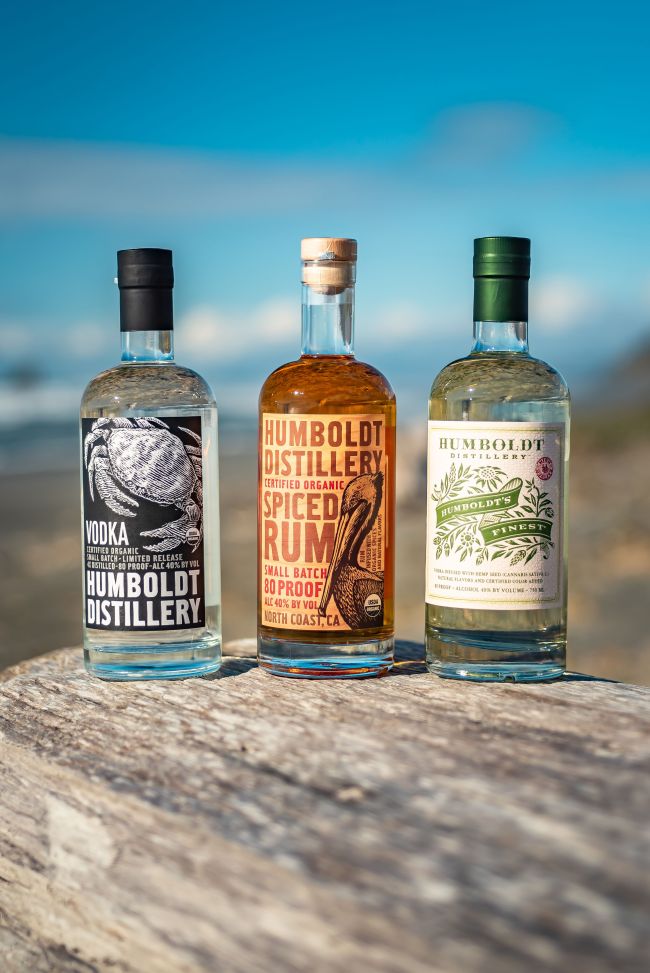 What makes Humboldt Vodka unique is that it’s distilled from organic American sugarcane, not a mash of grain or potatoes that go into inferior, mass-produced vodkas. As a craft spirit, clean water is paramount. The distillery puts its money where its mouth is in that regard: Each bottle of Humboldt Vodka sold includes a donation to the California Coastkeeper Alliance, which helps preserve swimmable, fishable, and drinkable water for all of California.

The result is a vodka that’s incredibly clean and smooth, with ever-so-slight hints of vanilla and citrus. The brand also makes rum – both spiced and original, along with a “unique botanical spirit” that’s similar to gin called Humboldt’s Finest. Except it’s infused with locally-grown hemp, because Humbolt is going to Humboldt. The result is a spirit that’s piney, with notes of cucumber, green tea, lemongrass, and basil. 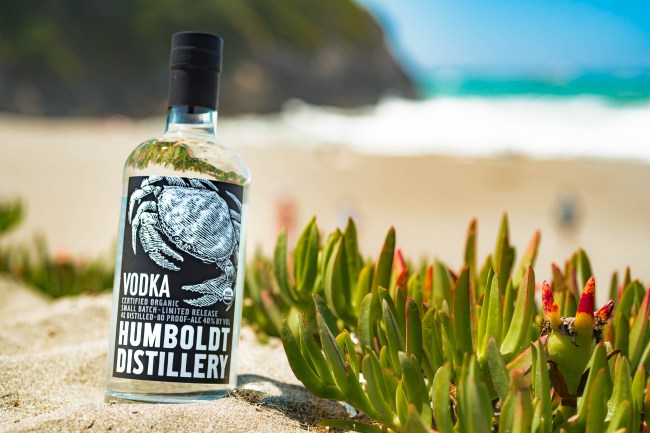 What cocktails pair well with oysters?

When pairing oysters with cocktails, you first have to understand the complex flavors of the mollusk itself. My esteemed guide to the oysters was Julie Qiu, a self-taught Oyster Sommelier and the founder of In A Half Shell, a website devoted to all things oysters (tagline: “Be Bivale Curious”).

On the menu, along with a shucking lesson (…which is remarkably easy, as long as you’re confident in your culinary knife skills) – Hog Island Sweetwaters (Magallana gigas), Hog Island Atlantics (Crassostrea virginica), and Hog Island Kumamotos (Crassostrea sikamea).

Here are the cocktails paired with the oyster flight: 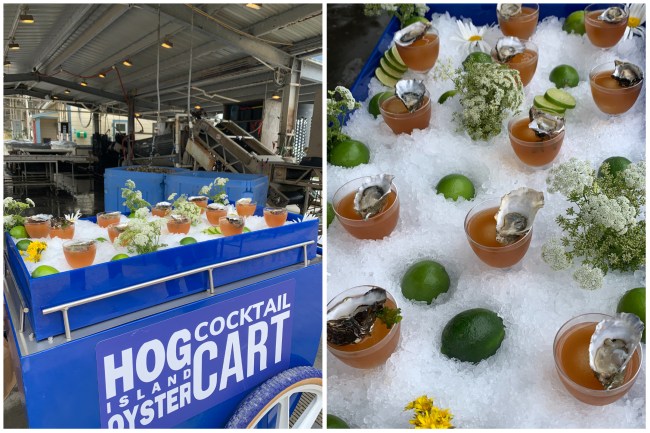 Tasting notes: The ultimate savory concoction, like an entire appetizer to a fine gourmet meal. A true delicacy. 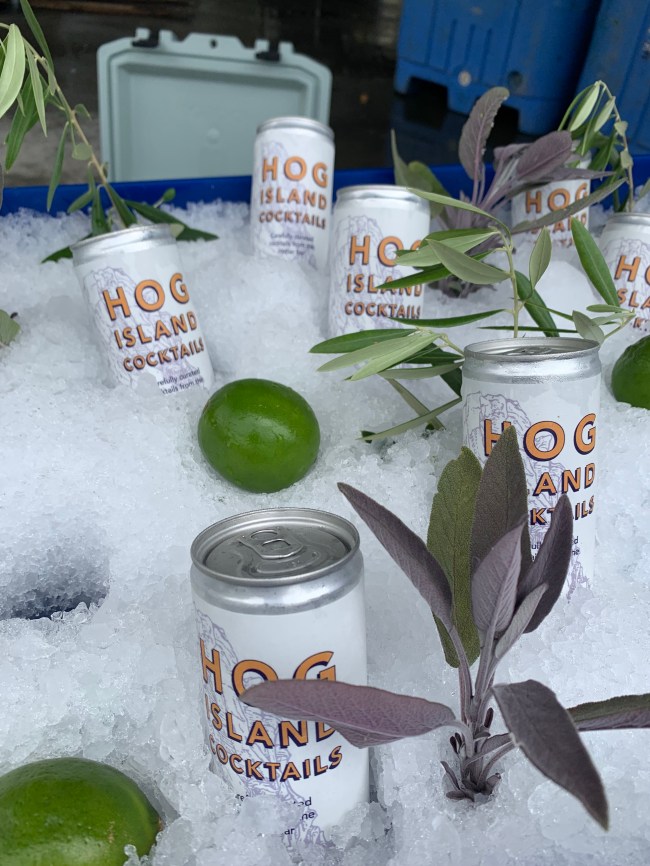 Tasting notes: So fresh and so clean. Pimm’s Cupp dates its roots back to Charles Dickens-era London, where it was often imbibed with fresh oysters back when they were plentiful, cheap, and hawked by vendors on almost every street corner in old London Town.  The herbaceous, gin flavors of Pimms #1 with ginger is a sort of sweet palate cleanser. Think Moscow Mule with even more botanicals.

This one was in a can, but it’d be pretty easy to whip up at home. 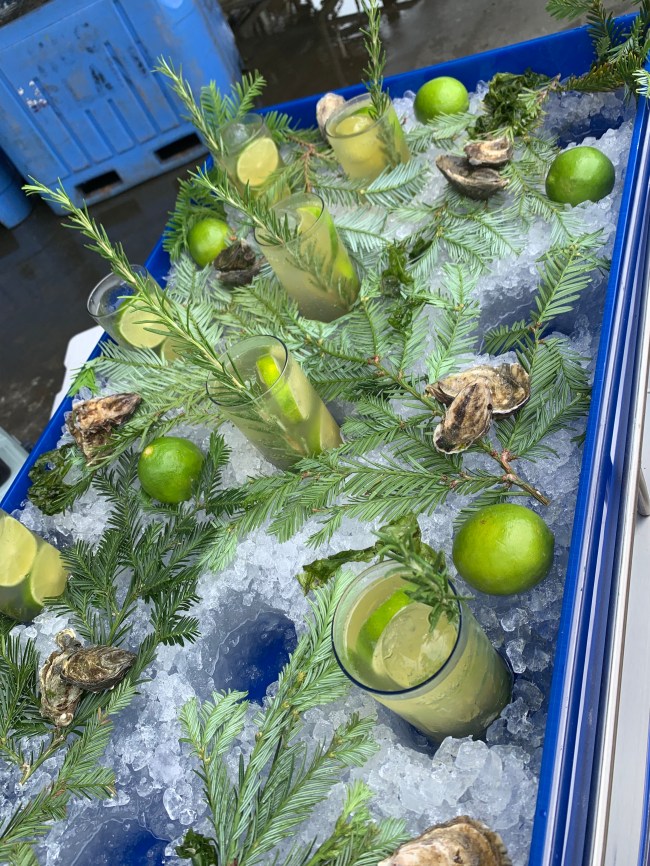 Tasting notes: Mignonette has also been paired with freshly shucked oysters for generations. It’s a tonic made from sweet minced shallots, then blended with white wine vinegar, peppercorns, and tarragon, which gives it a bittersweet, anise-esque touch. Usually, when you order oysters out, it’s one of the sauces that comes with your platter. As a tonic for booze, however, it blends even better – It brings out the mineral, briny qualities of an oyster – not too sweet and not too harsh, like a delicate dance on the back of the palate. 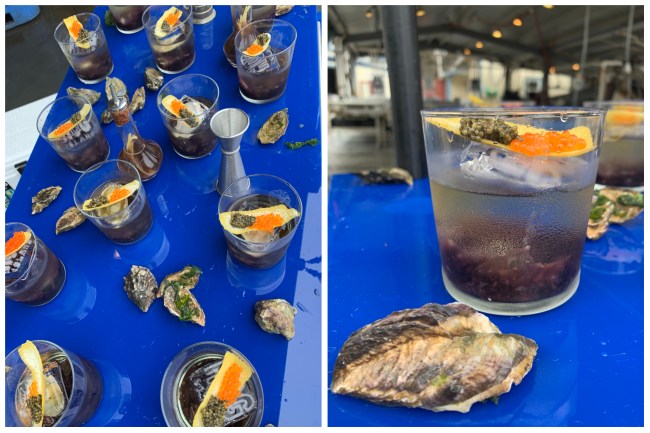 Tasting notes: Truly a grand finale in a glass. Just look at that list of ingridents! This is a umami rollercoaster. You name the flavor, it’s here: It’s sweet. It’s smoky, tangy, a little spicy, and complex. It’s like a zesty martini with serious sealegs.

Here I am, enjoying my Vesper Cocktail. It was quite delicious. 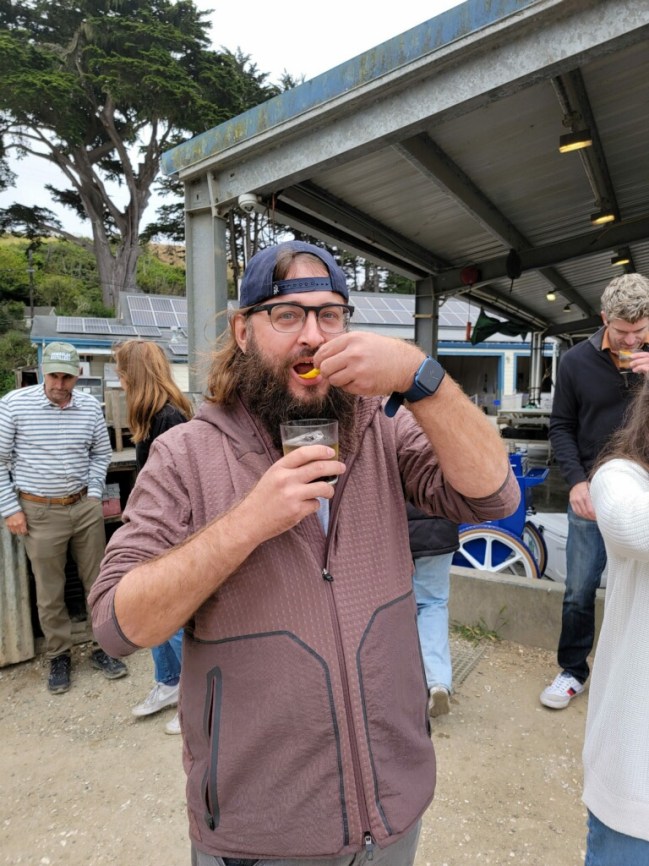 It me, enjoying oysters + cocktails

Other great cocktails with oysters:

My oyster + cocktail experience at Hog Island Oyster ended with the Vesper. But, in an attempt to be as comprehensive as possible, here are a couple of other ideas that pair well, featuring liquors besides vodka.

Mmm. There’s nothing quite like the intense smokiness of mezcal with the sweet, creamy brininess of raw oysters. This signature cocktail was developed by Saul Ranella, the bar manager at Hog Island Oyster Co’s San Francisco outpost.

Here’s how to make it, via The Taste Edit: 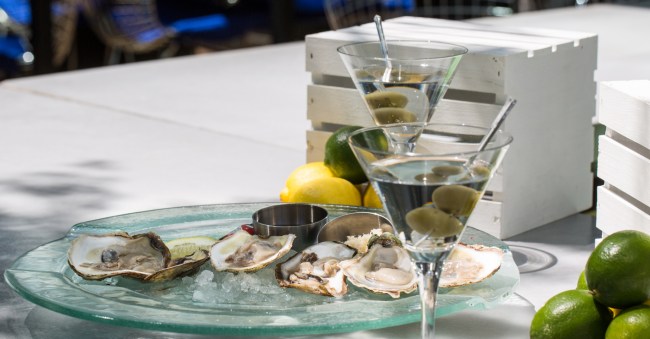 A salty old staple, enjoyed by Madison Avenue-types slurping oysters while waiting for their train at Grand Central Station since the 1800s.

Gin and vermouth. Shaken and garnished with an olive or a lemon twist. Or remove the vermouth, add the olive for the shake and make it a dirty martini. 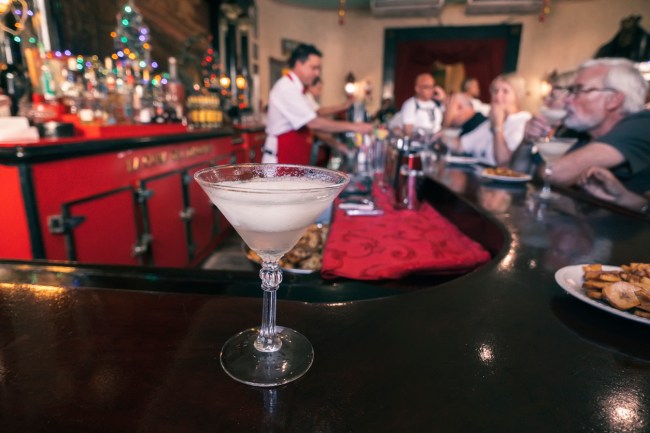 The Hemingway Daiquiri is the signature cocktail the novelist liked to drink at the El Floridita Hotel in Havana – one of his many hangouts in the Caribbean city he called home for decades. Per Papa’s request, this daiquiri isn’t loaded up with sugar, which means it will bring out the delicate balance of the oysters nicely.

Oh, as a former English major, I’d be remiss if I didn’t use this moment to plug one of my all-time favorite Hemingway quotes, from A Moveable Feast about being a young writer in Paris in the Roaring ’20s. There’s just so much… synergy… to not plug it:

“As I ate the oysters with their strong taste of the sea and their faint metallic taste that the cold white wine washed away, leaving only the sea taste and the succulent texture, and as I drank their cold liquid from each shell and washed it down with the crisp taste of the wine, I lost the empty feeling and began to be happy and to make plans.”

One more plug here for Julie Qiu, our wonderful oyster sommelier at Hog Island. I’ve been devouring oysters since I was a little kid. Hanging out with Julie for the afternoon was a crash course on everything there is to know about oysters – the ecology, how they’re farmed, what some restaurants royally mess up about oysters, why certain kinds of oysters have certain kinds of flavors, whether or not it’s actually ok to eat oysters in a month that doesn’t have an “R” in it (depends on the water temperatures at the source).

I really enjoyed the conversation and education. So here’s a cocktail suggestion from her blog, called The Pai-loma.

It’s her take on a Paloma oyster shooter, with ample smoke from the mezcal.

I hope this was a helpful guide to oysters and cocktails.

Cheers, here’s to living life the fullest on the half-shell!