Bigfoot Sighting Reported In California: ‘I Have Never Seen Anything Like’ It, Says Witness 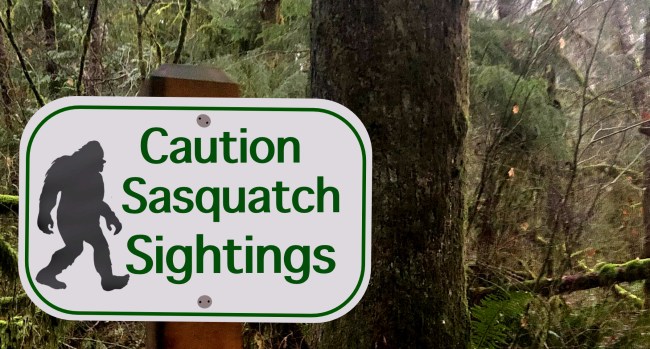 It looks like 2021 is going to be just like 2020 when it comes to reports consistently coming in from around the world regarding sightings of Bigfoot.

We all know why that is, right?

Well, there is a reason why a lawmaker in Oklahoma recently introduced a bill to institute a official Bigfoot hunting season down there.

And there’s a reason why Bigfoot goes by 58 different names in countries around the world.

Of course, it’s because he’s real.

For further proof of this fact, we head to an area just south of Garberville, California.

It was there, on Highway 101, that a man named Rick Bates recently had his very own unsettling experience with Sasquatch.

Bates reported his encounter to the Bigfoot Field Researchers Organization (BFRO), which is a real thing, that exists.

“I was driving home from Brookings Oregon on 1-23-21,” Bates wrote. “I was south bound on highway 101 south of Garberville, Ca and south of the Benbow Inn. The road makes a few turns and the speed limit drops in the area. As I rounded a sweeping right hand turn I saw a figure on the south bound shoulder of the highway. I was the only vehicle in the area about 8:15 PM. My speed was about 45-50 MPH as I passed the figure. The figure was laying on the shoulder of the road on its right side. I estimated the height to be about 7’. I was looking at the creature’s back and noticed it had broad shoulders and was thick torso shape. While the shape similar to a human it was not human. It was not a bear either. I could see muscular features in its glutes and a head on the shoulders that was somewhat tapered toward the top and being held off the ground. It’s hair was a chocolate brown and very course. The hair was not fur like of a bear at all.

“As an avid hunter and fisherman I spend a lot of time in the woods. I spent every summer camping in that area as well as a kid. I have never seen anything like what I saw just this evening.”

I spoke with the witness. He is a 20 year active duty law enforcement officer and describes himself as very observant. He has driven that highway many times. He undoubtedly saw a large animal laying down next to the highway in the dark, illuminated by his headlights. The question is what type of animal. He could confidently eliminate deer, bear, elk, etc. He says it was shaped like a man but covered in chocolate brown fur.

It’s body was perpendicular to the highway. It’s feet were within a feet of the white line on the side of the highway, “as if it was roadkill,” but when he returned to the spot 2 minutes later it was no longer there.

This investigator has never heard a report of a bigfoot laying down within a few feet of a highway … but that doesn’t mean it wasn’t observed in this case. The sighting occurred after dark along a desolate stretch of Hwy 101 that follows the South Fork of the Eel River for many miles.

Approx 1500 feet further south along the highway is the famous “Legend of Bigfoot” Gift shop. It’s in the middle of nowhere. A skeptic would argue that figure was likely a hoax (a man in a costume) because it was so close to the gift shop. The counter argument is that bigfoot-themed gift shops and/or bigfoot statues out west are often located in areas where there are many sightings, so the sighting didn’t happen because of the gift shop. Rather, the gift shop happened because bigfoot sightings happen in that area.

It’s anyone’s guess as to why, in this case, the figure was laying so close to the highway, whether it was a bigfoot or a person in a bigfoot costume. It was not road kill because the figure wasn’t there when he returned to the spot 2 minutes later. One could conjecture that the creature was hit by a car or truck, and then managed to walk away right after the witness drove by it. But no one so far has reported a collision with a bigfoot there. No one was stopped on the side of the road nearby when the witness drove past the figure. It would have been a very noticeable collision even with the largest truck.

This sighting is so fresh that it would be worthwhile to look around for tracks in the area if you live in the vicinity.

The state of California is no stranger to Bigfoot sightings. There have been numerous witness reports documented over the years just outside of Los Angeles alone.