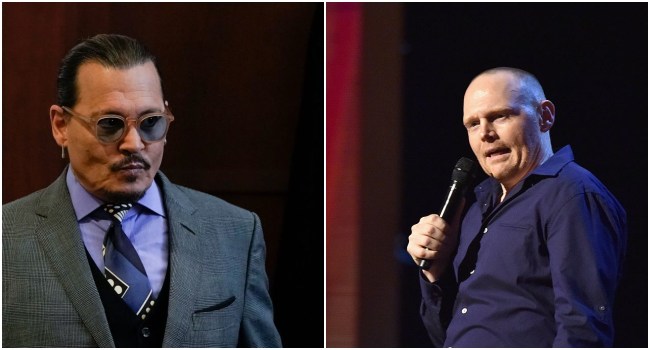 Bill Burr is never one to shy away from commenting on a controversial topic, so it should come as no surprise that the 53-year-old comedian, actor, and podcast has weighed in on the ongoing defamation lawsuit between Johnny Depp and Amber Heard.

Speaking on an episode of his Monday Morning Podcast, Burr — who admitted to being a “big” fan of Depp’s — said that he thinks Depp is “crushing” the trial and wondered if the people who’ve publically besmirched Depp’s name will apologize to him if he is able to prove that Heard lied about him.

“I’m too big a Johnny Depp fan to watch [the trial]. I love that guy and I just — I don’t want to hear all these personal details and shit,” Burr said on a recent episode of his Monday Morning Podcast.

“From what I’ve seen the guy is f—ing destroying. And what’s great about this, is if he really does expose this woman for lying. I’m wondering if all these people that, you know, just accepted her lies about him if they’re going to apologize somehow.”

Burr also said it would be “nice” if Depp received a “public apology” for the people who have “trashed” him in recent years. It’s unclear if burr also meant Heard should apologize, too.

Burr noted that people have “publicly trashed” Depp and said “it’d be nice if they publicly apologized and said, ‘Maybe next time we won’t jump to conclusions.’”

“It really does amaze me how the pendulum just does not seem to swing the other way,” Burr added. “All of these women’s groups that when they see a woman that lies like this, which really hurts their position, because there are women out there that are in a relationship that this woman evidently lied and claimed that she was in. And for someone to go out and lie about it, it hurts the people that are actually in it! You would think they would cover this.” [via Variety]

Burr’s comments are certainly different than Howard Stern’s, who ripped Depp for being a “narcissist” while claiming that he’s “overacting” during the trial.

During his testimony, the 58-year-old actor said that Heard’s allegations of domestic abuse cost him “nothing less than everything.”

“Because when the allegations were made… telling people that I was a drunken, cocaine-fueled menace who beat women, suddenly in the 50s. It’s over. You’re done,” Depp said during an emotional testimony a few weeks ago.