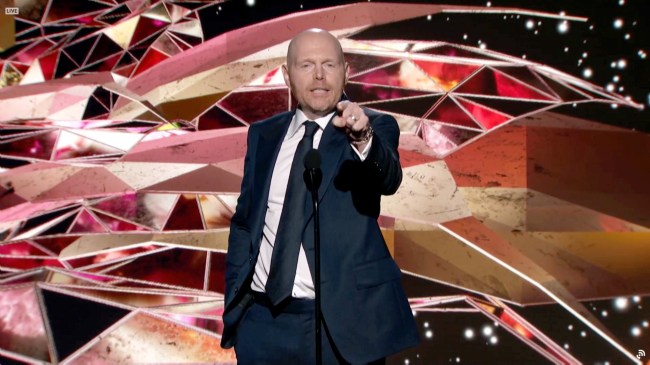 Bill Burr appeared on the GRAMMYs Premiere show for no longer than a Dua Lipa song and nearly brought the interwebs to its digital knees.

Burr mocked the pianist who performed directly before him, butchered a winner’s name, and ridiculed feminists while presenting the best “Tropical Latin Album.”

[Related: People Are Trying To Cancel Bill Burr Again After His Appearance At The GRAMMY’s]

Bill Burr is xenophobic, sexist and racist and the crew just all laughed along with his shit jokes. He is an actual embarrassment!

Of the millions who watched the GRAMMY’s yesterday, it was clear that many hadn’t acclimated themselves to the brand of comedy that has catapulted Burr to the top of the mountain.

But for the rest of us, it was *Michael Jackson eating popcorn GIF* (Can I still say the M word?)

It’s the quarterly attempt at cancelling Bill Burr for being hilarious I see.

Bill Burr after being cancelled pic.twitter.com/PYRLGharjO

Idk what he said but god I love bill burr pic.twitter.com/SlyPhr74jx

I woke up to great man @billburr trending, with people outraged and wanting him cancelled.
I cannot stress this enough…..whatever @billburr said, I agree!#Comedy

Bill Burr is a living legend. Go cancel yourselves.

Those who were offended by Burr’s jokes, you have every right to be. Those who were not, same. Why do we continue to complicate this?