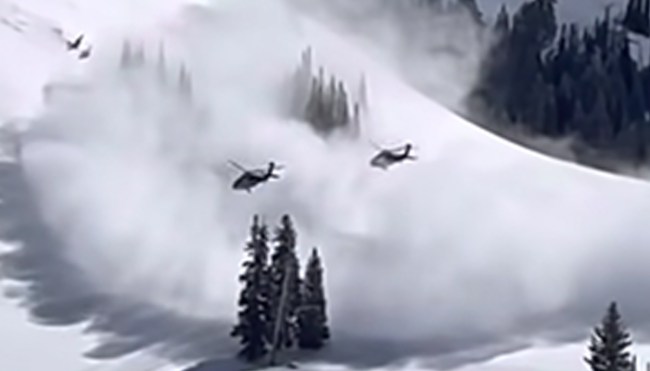 You’re likely familiar with Black Hawk Down, the film adaptation of a non-fiction book that chronicled the mission to rescue the crew members who were inside two helicopters that were struck by RPGs during an ill-fated attempt to capture a Somali military leader in the 1993 campaign that devolved into the Battle of Mogadishu.

On Tuesday morning, a number of people who were hitting the slopes at Snowbird ski resort in Utah were treated to a similar (albeit much less dramatic and—thankfully—dangerous) incident at the expense of the National Guard members manning the two Black Hawks that were engaged in a training exercise near the mountain located around 30 miles southeast of Salt Lake City.

According to NBC News, the choppers were trying to touch down near the resort as part of what officials described as a “routine survivability and mobility mountain” exercise. However, things went south after pilots in one vehicle lost sight of the ground and subsequently crashed into the snow before the second helicopter followed suit after it was apparently struck by dislodged pieces of the other’s rotor.

The wild development was captured by multiple people who started filming when they saw the Black Hawks closing in on the slopes, including some who came close to being swallowed by the cloud of snow that was kicked up and other onlookers who spotted some fellow skiers who were dangerously close to the crash site.

Video from one of the skiers of the Blackhawk helicopters impacting the ground in Little Cottonwood Canyon, Utah today. 👀 pic.twitter.com/eXeDwhNK8r

TWO US military Blackhawk helicopters crashed in Utah today, and were filmed by skiers at the location. #snowbird pic.twitter.com/7X6wfHbYmv

Thankfully, no spectators were harmed and all of the National Guard members involved were able to walk away from the crash without any serious injuries, which is pretty miraculous when you take a look at the footage.