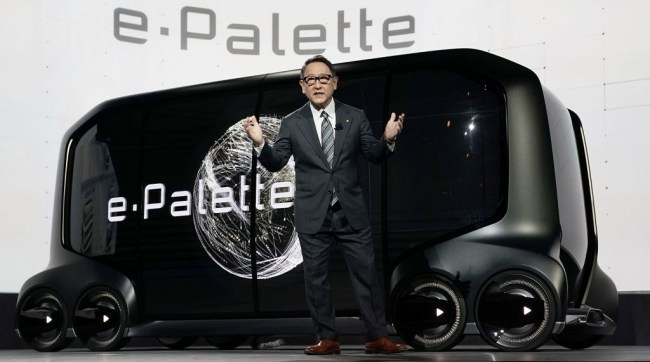 On Monday we reported that Toyota had officially teamed up with Pizza Hut, Uber, Amazon, Didi Chuxing, and Mazda to create some new autonomous (i.e. self-driving) vehicles. Toyota also stated that they hope to debut what they’re calling their e-Palette project at the 2020 Olympics in Tokyo.

As with any new self-driving anything, the first thought many had (and rightfully so) was, “Will it run people over?” According to the president of the Toyota Motor Company, it won’t.

“Just think how good e-Palette would be at Burning Man,” Akio Toyoda, president of the Toyota Motor Company, said at CES 2018. “In our ongoing and relentless pursuit to own and define the modern pizza experience for our customers, we are focused on technology-based solutions that enable our team members and drivers to deliver even better customer experiences,” said Artie Starrs, president of Pizza Hut U.S. “With Toyota, we are excited to be partnering with an undisputed leader in human mobility with a reputation for innovation, reliability and efficiency, as we define the pizza delivery experience of the future.”

A Pizza Hut battery electric e-Palette vehicle could even “serve as a mobile kitchen in areas of the world where such an experience would match consumer interests.” In a press release, Toyota, the world’s top automaker, assured people that their self-driving cars wouldn’t run over people thanks to their “Guardian technology will act as a safety net to help ensure appropriate operation.”

We know how this goes. https://t.co/1nTDxuOrlD

Naturally, this led to more thoughts and questions…

Me when you realise its all coming true pic.twitter.com/xjJ8unNd0m

is the car gonna bring the pizza upstairs and ring the doorbell of my apartment?

Pizza Hut, thankfully, saw the tweet and did it’s best to reassure everyone…

Nice try, Hut, but considering thousands of Black Mirror viewers have no idea what the title of the show even means, there’s no way this new vehicle isn’t going to cause mass hysteria when it hits the streets.