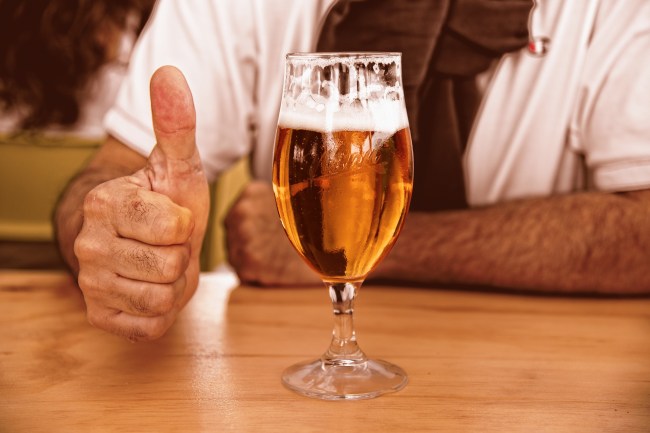 Doctors had to perform life-saving surgery on a man who drank a bunch of beer and passed out for so long (without peeing) that his bladder actually ruptured in three places. The 40-year-old man went hard the night before and drank 10 beers which aren’t a lot when you’re 21 but at 40-years-old I have to imagine that drinking 10 beers is similar to drinking 30 when you’re younger, right?

He then passed out for 18 hours to sleep off the hangover. How? How does one manage to sleep for 18 hours? Is this a skill that someone can teach me? I can pinpoint the exact time I slept more than 8 hours. It was 542 days ago on New Year’s Day 2019 when I was able to sleep off a hangover thanks to my blacked-out hotel windows in Barcelona.

So this dude pounded a bunch of beers and slept so hard (without peeing) that his bladder ruptured in multiple spots and parts of his intestines were leaking into his bladder which could’ve been fatal if doctors didn’t perform emergency surgery. Here’s the rundown from the Post:

The 40-year-old man, identified only as Mr. Hu, reportedly fell asleep — ahem, passed out? — after downing 10 bottles of beer during a heavy drinking session the night prior — without heeding nature’s call once, reports Zhuji Daily.
After experiencing searing abdominal pains, the lager-logged soul reported to the to Zhuji People’s Hospital in Zhejiang, eastern China, where a CT scan revealed that his bladder was torn in three places. The pee-induced pain was so intense that Hu was unable to lie flat, and he failed to relieve himself of his massive urine reservoir despite several attempts.

Even worse, one of the holes had ruptured toward the patient’s abdominal cavity and forced part of his intestines to spill into the bladder — a complication doctors deemed potentially fatal if not fixed immediately.
Fortunately, they were able to save Hu’s life via emergency surgery, and he has since been released from the hospital after making a complete recovery, according to local media outlets. (via NYPost)

10 beers is A LOT of beer if you’re not peeing it out but I’m still having trouble wrapping my mind around that being so much beer this guy passed out so hard he didn’t wake up for 18 hours.

I’m trying to do the alcoholic equation on how much beer it would take to keep me down for that long and I’m really not sure what that number of beers would be but it’s a scary amount.

A urologist in the article is quoted as saying the hospital admits at least one person each year for this same condition, drinking so much alcohol their bladder ruptures. When you drink alcohol you’re less aware of your body’s needs and you’re putting a ton of extra liquid into your body which means a bunch of extra urine.

I guess the point of all this is if you wake up hungover and need to pee you shouldn’t fight that urge. Just get up and pee.