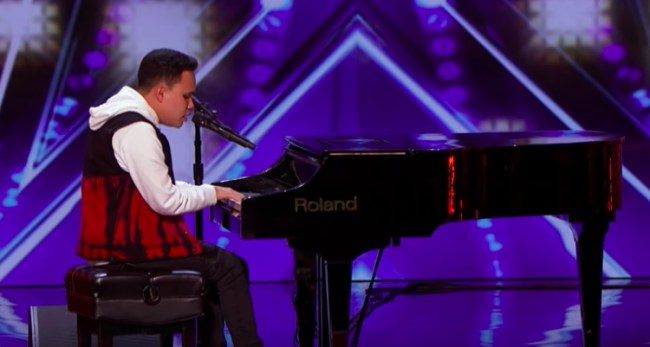 So I saw an America’s Got Talent video trending as the number one video on YouTube. Five million views in a day. Didn’t pay too much mind to it, I get it, people can sing. Then it got sent to a couple group chats I’m in (big shot, not to brag), and I caved to the peer pressure.

Just minutes in, I felt an unfamiliar feeling. My body began to tingle, the back of my eyeballs began to heat up, and all the petty personal problems I’ve let sit heavy on my shoulders evaporated. It was happening. I was feeling emotions, emotions that I had suppressed since Mufasa died in The Lion King.

A little context: Kodi Lee is a 22-year-old pianist and singer who is blind and has autism. His mother, who accompanied him to the stage, claims that music is the primary mechanism for her son to “withstand living in this world” and that his love for performing saved his life.

I suggest before clicking ‘play’ on the video below, you grab a couple Kleenex and find a place to be alone. You may cry, and if that happens, fear not, you can always watch vicious MMA knockouts afterwards to bring yourself back to equilibrium.

The song: Donny Hathaway’s “A Song For You.”

These judges are all of us.

Kodi’s performance was met with an extended standing ovation and he was awarded the first golden buzzer of the 2019 season, meaning he automatically advances to the finals.

I've been sitting in so many emotions. Trying to keep it together. Trying to stay strong to fight. But I'm tired. So, I am beyond grateful to have seen Kodi Lee who has given me strength this morning. Art heals. Art speaks. Thank you, Kodi, for reminding me. https://t.co/pfKLQ1WJSE

Loved this moment so much👏🏾👏🏾😭😭! Stood up and cheered in my living room. #KodiLee #AmericasGotTalent https://t.co/oRRAbH3mO0

I’ve been on Twitter a long time and this is one of the most beautiful things I’ve ever seen on here.

Kodi Lee, you are an absolute rockstar. pic.twitter.com/XY2wdcHUqT