The Producers Of ‘The Purge’ And ‘Get Out’ Are Making A ‘Magic 8 Ball’ Movie (Yes, You Read That Right) 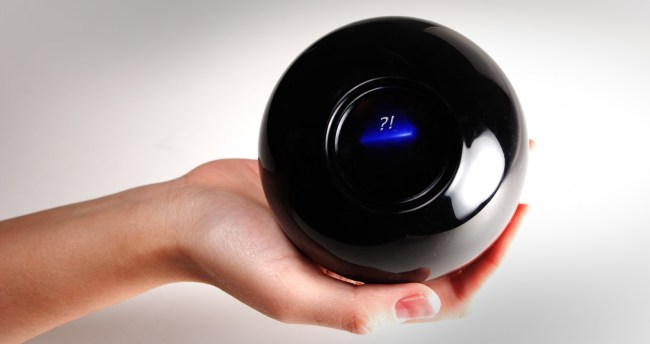 Blumhouse Productions has produced some amazing and/or crazy movies over the past few years: Get Out, BlacKkKlansman, The Purge series, the Insidious series, Halloween, Glass, Split, Truth or Dare, Happy Death Day 1 and 2, the Paranormal Activity series, and on and on.

There have also been some good and/or “interesting” movies based on toys over the years: the Transformers series, the G.I. Joe film franchise, The LEGO Movie series, and, ummm… Battleship?

So why not Blumhouse Productions making a movie based on a toy?! Like, say, the Magic 8 Ball?!

This is a thought that more than one person with the ability to actually do such a thing believed is a terrific idea.

Which is why Blumhouse Productions will be making a movie in partnership with Mattel Films (yes, that is really a thing, go figure), the minds behind such movies as WWE Slam City, Ever After High, and Monster High: Great Scarrier Reef.

Jeff Wadlow, who directed Blumhouse movie Truth or Dare, as well as Kick-Ass 2 and True Memoirs of an International Assassin, will be helming the Magic 8 Ball movie.

“Since the 1950s, Magic 8 Ball has inspired imagination, suspense and intrigue across generations. This iconic toy has a built-in connection with fans and untapped potential for storytelling,” said Robbie Brenner of Mattel Films. “There are no partners better suited to tell the Magic 8 Ball story in collaboration with Mattel Films than Jeff Wadlow and Blumhouse Productions, whose unique approach to the thriller genre has captivated audiences worldwide and has gained widespread accolades.”

“As fans of Mattel and their iconic brands, we’re looking forward to bringing Magic 8 Ball, one of their most celebrated toys, to life, and playing against expectations in doing so,” Blumhouse founder Jason Blum said. “We look forward to partnering with Mattel Films to put this project on the fast track to the big screen and create a memorable experience for moviegoers.”

What exactly are the expectations for a Magic 8 Ball movie?

Amazingly, this isn’t even the first time someone has tried to make a Magic 8 Ball movie. Back in 2010, Paramount tried developing a film based on the toy. Hard to believe that they never saw it through to fruition, isn’t it?