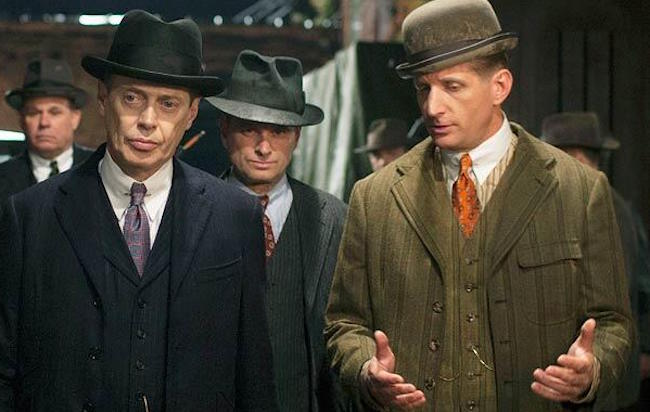 On September 19, 2010, the first episode of Boardwalk Empire aired on HBO. The series premiered three years after The Sopranos came to an end, which marked the start of a weird period for the network, which was still a year away from getting the shot in the arm provided by Game of Thrones. It hadn’t had much success finding a flagship drama to replace the show that arguably ushered in the Golden Age of television but it initially looked like it had found one with a program looking back at the Prohibition Era.

On paper, Boardwalk Empire had all the makings of a hit. Showrunner Terrance Winter had served as a writer and producer on The Sopranos, Martin Scorcese directed the pilot, and Steve Buscemi was tapped to lead a cast that included notable members of the “That Guy (and Gal)” club, including Michael Shannon, Michael Pitt, Gretchen Mol, Kelly MacDonald, and Stephen Graham. It also featured HBO royalty in the form of Michael K. Williams, who had last been seen playing Omar Little on The Wire. The premise was also basically everything you could ask for: a gangster saga set in the 1920s that pulled from true events centered around the bootlegging operations overseen by legendary mobsters including Al Capone, Lucky Luciano, and Arnold Rothstein.

To Boardwalk‘s credit, it never came very close to reaching “the last two seasons of Game of Thrones” levels of underwhelming but it also never managed to live up to its potential. It wasn’t really that bad but it also wasn’t really that good; one of those shows that hooks you just enough to keep you coming back every week but leaves you wondering why you did when the credits roll on the finale. It saw a steady decline in quality over the course of the first three seasons, and while it picked up some momentum during the final two, it was too little too late.

HBO had missed before, so it’s not as if the network was batting a thousand. It may not have been a complete dud like John From Cincinnati but Boardwalk Empire’s failure to really grab hold of the zeitgeist and garner both consistent critical and general praise was fairly surprising when you consider it was seemingly destined to become The Next Big Thing.

It’s worth noting it wasn’t a complete bomb from a critical standpoint, as It was nominated for 57 Emmys (winning 20 of them) and took home the Golden Globe for Best Drama in 2011. However, it didn’t manage to keep its audience engaged after a premiere that drew five million people before its ratings began to decline at a steady pace. That season’s finale saw 3.3 million tune in, a number that fell to 2.9 million when the second premiered (for context, the last season of The Sopranos boasted an average of eight million viewers per episode).

When you consider Boardwalk revolves around organized crime in the great state of New Jersey, it was only natural that it was compared to The Sopranos from the jump. That wasn’t necessarily fair, but at the same time, HBO kind of did that to itself and practically set itself up for failure in the process. As a result, the show failed to secure the same kind of legacy as Breaking Bad, Mad Men, and the other shows that defined the era of prestige television; it’s simply an afterthought—if not a cautionary tale concerning the pitfalls similar shows should avoid.

However, it didn’t have to be that way. Boardwalk Empire could’ve been the show both HBO and audiences wanted it to be but had a few fatal flaws that prevented it from achieving that goal—especially these mistakes that came back to bite it in the end. 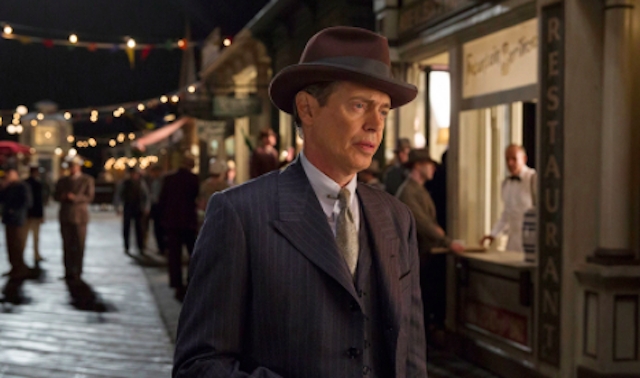 Steve Buscemi is a great actor. Like, really great. My dude rarely catches an L and is one of the more reliable performers out there on both the small and big screen. However, casting him as Boardwalk‘s primary antihero Nucky Thompson was a gamble that just didn’t pay off.

Boardwalk Empire was based on the true events chronicled in the Nelson Johnson book of the same name that it draws from. Thompson is a fictionalized version of Enoch Johnson, who effectively ran Atlantic City’s political machine before, during, and after Prohibition, frequently relying on some less than savory tactics to get his way. There was only so much to show could do here to avoid running into “The Sopranos Problem” that dogged it over the course of its run but it was impossible to ignore the parallels between Buscemi’s character and the one that defined James Gandolfini’s career.

The Sopranos star was actually in contention for the role thanks in some part to his fairly striking resemblance to Johnson but Winter was afraid the two parts were a bit too similar and eventually decided to pursue Buscemi at Scorcese’s urging. While the actor certainly managed to hold his own, he lacked the physical presence Gandolfini would’ve brought to a character that needed more than what Buscemi was unable to provide, as he largely opted to use his signature creepy eyes to attempt to reach a level of menacing he only occasionally managed to get to. He may have been able to make the character his own over time but the Gandolfini issue likely had a hand in the show’s slow start. 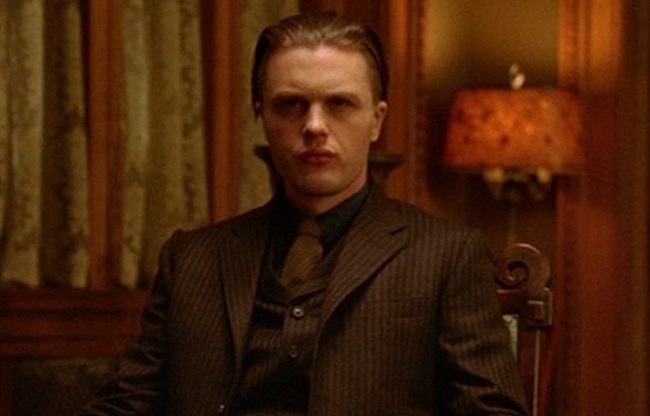 When we first meet Michael Pitt’s Jimmy Darmody, he’s Thompson’s loyal sidekick; someone who gets his hands dirty when the man he answers to needs to do a bit of outsourcing in order to keep his clean. The World War I veteran and Princeton drop out serves as Boardwalk’s version of Jon Snow, as he’s the illegitimate son of Louis Kaestner (a.k.a.The Commodore), who ran things in Atlantic City before Thompson took over. He quickly established himself as a character to keep a close eye on, as he was used as the bridge who helped bring up-and-coming mobsters like Capone and Luciano into the fold.

Winter viewed those “baby gangsters” as a key element of the show, as he was very invested in the idea of focusing on the early days of the men who would eventually become some of the most notable names in the history of organized crime. Unlike those figures, Jimmy didn’t exist in real life but followed a similar path that led to him aligning himself with his father and rising up the ranks when the old guard and the new began to clash in the second season.

For a minute there, it seemed as if there was going to be a passing of the torch as Jimmy’s story started to box out Nucky’s as Boardwalk’s central narrative, which was definitely a step in the right direction from a creative standpoint. However, it’s kind of hard to keep taking steps when you shoot yourself in the foot, which is exactly what the show did when it decided to have Thompson shoot Jimmy in the face.

A few months earlier, Game of Thrones had chopped Ned Stark’s head off in a truly jaw-dropping moment. The man played by the biggest name featured in the cast at the time had been framed as the show’s main character, and just like that, he wasn’t. Boardwalk attempted to achieve the same effect by killing off Jimmy but ultimately failed to do so because it bid farewell to him a bit too soon.

We’ll never know what Boardwalk Empire would’ve become if Jimmy had endured long enough to be thrust front and center, but based on how things were shaping up, it seems like it would’ve been better for it. Not only would offing Buscemi been arguably more surprising than bidding adieu to the death-prone Sean Bean, it would also have injected some young blood into a show that probably needed it and allowed Pitt to shine even more than he already had. 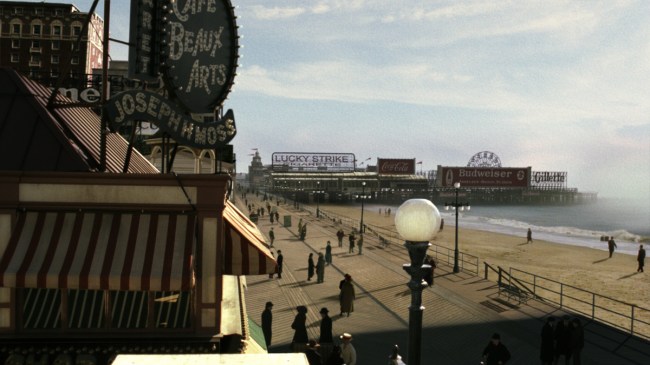 Boardwalk Empire initially focused on the events that were unfolding in Atlantic City during the start of Prohibition and the place where it was set was arguably as much of a character as the people responsible for transforming into the hub it became during the time period. However, before long, we were bouncing between Philadelphia, New York, Chicago, and the sprawling metropolis that is Cicero, Illinois.

This was yet another issue Boardwalk Empire didn’t really have much say in, as the array of gangsters it followed naturally (and historically) expanded their reach as they gradually rose to prominence. Other shows have managed to juggle various locations while keeping viewers both engaged and unconfused (see Thrones, Game of), but in order for it to work, they all need to be tied together by a compelling thread that Boardwalk largely lacked.

This also presented a bit of a problem for Buscemi, who delivered a solid performance but nonetheless was outclass by Stephen Graham’s Capone and Michael Stuhlberg’s Rothstein. It eventually reached a point where you were almost disappointed when the action returned to Thompson’s base of operations, which certainly wasn’t a great look.

Again, bouncing around from locale to locale isn’t impossible to pull off but there’s something to be said for narrowing your geographical focus and I can’t help but think Boardwalk would’ve been a bit tighter than it ultimately was if it had done exactly that.

The majority of Boardwalk Empire is set in the early 1920s (although it did jump ahead to 1931 during its final season). Now, I’m certainly not a music historian but Wikipedia informs me electric guitars didn’t become a thing until the year after everything wrapped up, which makes you wonder who the hell decided Brian Jonestown Massacre’s electric-centric “Straight Up and Down” was the ideal song to open up every episode.

This might seem largely inconsequential, as the show’s theme song doesn’t really make or break it in the grand scheme of things. At the same time, I found it impossible to overlook a show that prided itself on its focus on authenticity would go with a track that was released in 1996. I got irrationally annoyed every single time the opening credits rolled, as the decision to opt for some gnarly rock ‘n roll as opposed to some big band music or smooth jazz is pretty inexplicable.

The worst part is that it also distracts from the objectively fantastic visuals that accompany an objectively terrible artistic choice, which is even harder to understand when you consider Winter had previously worked on a show that featured one of the most iconic opening sequences of all time—thanks in no small part to the choice of music, which perfectly captured its general vibe.

In the end, the theme song was a relatively small flaw but was one of the many that added up to prevent Boardwalk Empire from becoming a great show that would’ve been greeted by a number of glowing retrospectives to mark its 10th anniversary as opposed to an article about all of the things it did wrong.