Boeing Unveils Hypersonic Passenger Plane That Can Hit Mach 5, Go From NYC To London In 2 Hours 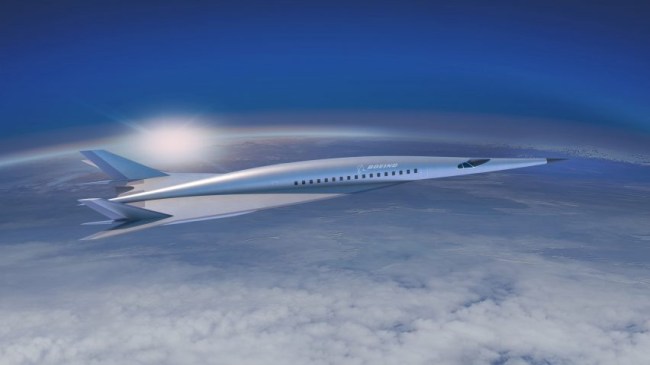 A typical commercial airliner hits speeds around 550 mph. That’s great and all, but we all have the need for speed especially when it comes to lengthy international flights. Boeing wants to build a hypersonic passenger plane that can jet you to your destination at speeds of around 3,800 mph.

At the 2018 Aviation and Aeronautics Forum in Atlanta this week, Boeing unveiled the design for a new hypersonic passenger aircraft that could hit speeds of up to Mach 5, which is close to five times the speed of sound. That would mean a flight from New York City to London would take around two hours, which currently takes around seven hours. This new aircraft would smash the record for a transatlantic flight, which is two hours and 52 minutes by the Concorde that flew around Mach 2.

Boeing says the sleek and futuristic hypersonic aircraft could have “military or commercial applications.” “We’re excited about the potential of hypersonic technology to connect the world faster than ever before,” said Kevin Bowcutt, Boeing’s senior technical fellow and chief scientist of hypersonics. “Boeing is building upon a foundation of six decades of work designing, developing and flying experimental hypersonic vehicles, which makes us the right company to lead the effort in bringing this technology to market in the future.”

Thanks Kevin, but that doesn’t help us with getting to Europe in mere hours any time soon. Get to work.