Bono Says He Is ‘Embarrassed’ By U2’s Music, ‘Really’ Doesn’t Like The Band’s Name 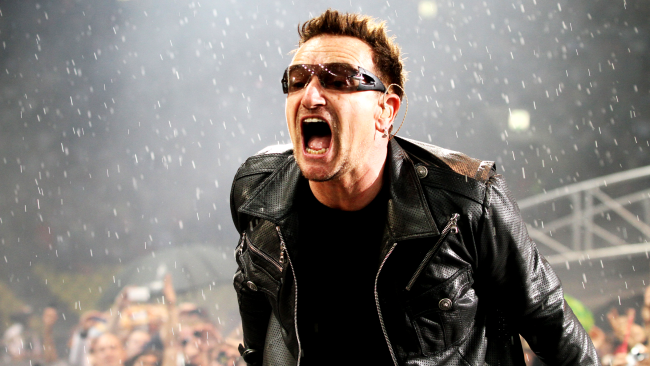 Bono, after 46 years as lead singer of U2, now says that he isn’t a big fan of his group’s music and really dislikes the band’s name.

“I’ve been in the car when one of our songs has come on the radio and I’ve been the color of, as we say in Dublin, scarlet,” Bono said this week on the Awards Chatter podcast. “I’m just so embarrassed. I do think U2 pushes out the boat on embarrassment quite a lot.”

He continued, “The one that I can listen to the most is ‘Miss Sarajevo’ with Luciano Pavarotti. Genuine, most of the other ones make me cringe a little bit.”

Bono, 61, added that he feels like he “only became a singer recently.Maybe it hasn’t happened yet for some people’s ears and I understand that.”

The song he says he is most proud of is “Vertigo,” but when it comes to the name of the group, U2, he isn’t very proud at all.

Paul McGuinness, the group’s first manager was the one that convinced them to keep the name U2, saying it would “look good on a T-shirt — a letter and a number,” despite Bono not being enamored with it, even back then.

“I still don’t. I really don’t. I was late into some kind of dyslexia. I didn’t realize that The Beatles was a bad pun, either,” Bono explained after The Edge revealed he didn’t like it. “In our head, it was like the spy plane, a U-boat, it was futuristic But then, as it turned out to imply this kind of acquiescence, no, I don’t like that name. I still don’t really like the name.”