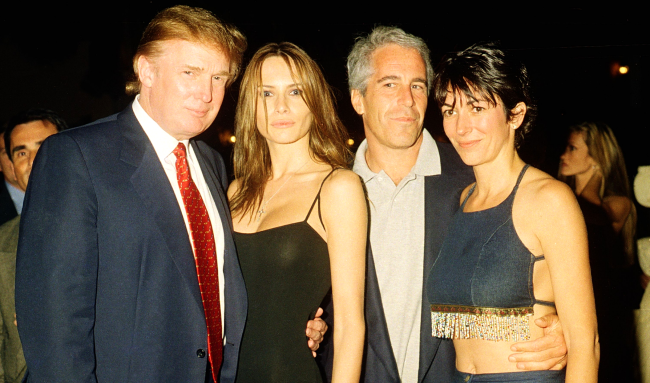 It was reported in February of this year that Jeffrey Epstein’s long time associate Ghislaine Maxwell allegedly admitted Epstein had secret tapes of President Donald Trump and President Bill Clinton.

In July, it was reported that an alleged Jeffrey Epstein address book contained hundreds of names, including celebrities and politicians.

Now, a new book titled Too Famous: The Rich, the Powerful, the Wishful, the Damned, the Notorious alleges that Jeffrey Epstein, who died while in prison on charges of sex trafficking of minors in Florida and New York, believed he could use secret information he held on the two Presidents and others to get the charges against him dropped.

Related: Things Got Very Awkward When Bill Gates Was Asked About His Relationship With Jeffrey Epstein

In the book, authored by Michael Wolff, according to DailyMailOnline.com, Epstein sought to use his information to elude justice.

‘The White House, through the Justice Department, was looking to press a longtime Republican obsession, and Trump ace-in-the-hole, and get Epstein to flip and reveal the sex secrets of Bill Clinton,’ he writes.

The other scenario was that prosecutors from the Southern District of New York, which were investigating Trump’s business affairs, ordered the arrest of Epstein to ‘pressure him to flip on Trump.’

Wolff writes that there were ‘many likely holes in these theories’ and the reality could have been that Epstein was ‘just one more fallen sexual villain.’

‘No matter, in Epstein’s view – shared by [lawyer Reid] Weingarten – that did not mean there wasn’t, even in this climate, a deal to be made,’ the book states.

Wolff’s book also reveals that Ehud Barak, the Prime Minister of Israel from 1999 to 2001, was “almost a fixture” at Jeffrey Epstein’s Upper East Side mansion.

Epstein also allegedly compared himself to New England Patriots owner Robert Kraft, who was arrested in February of 2019 for his involvement in a prostitution and sex trafficking case brought forth by law enforcement, saying, “Bob gets dinner out, I get take-in.”

Wolff, who visited Epstein’s home in the months before his death, also makes other claims.

Steve Bannon called in on the phone during the visit and told Epstein: ‘You were the only person I was afraid of during the campaign’ because he thought he had dangerous secrets on Trump.

Epstein replied: ‘As well you should have been.’

According to Wolff, Epstein’s attorney Reid Weingarten told his client that his legal problems were ‘bad, heart attack bad’, adding that it was the ‘fight of your life.’

Barak tried to offer some sympathy for Epstein, who served 15 months in prison in Florida in 2007 for soliciting a minor for prostitution under a sweetheart plea deal.

‘Prostitution, it seems is no longer called prostitution. It is something else. Much worse,’ he said.

Epstein asked Weingarten what ‘cover’ he could get from the case of Robert Kraft, who had recently been arrested for solicitation of prostitution at massage parlors in Florida.

Epstein also allegedly considered doing an interview with 60 Minutes, CBS This Morning on Rachel Maddow’s show to try and rehabilitate his image.

Unfortunately for him, he never got that chance after he was arrested by Federal agents at Teterboro airport in New Jersey on July 6, 2019 following a flight back from Paris.