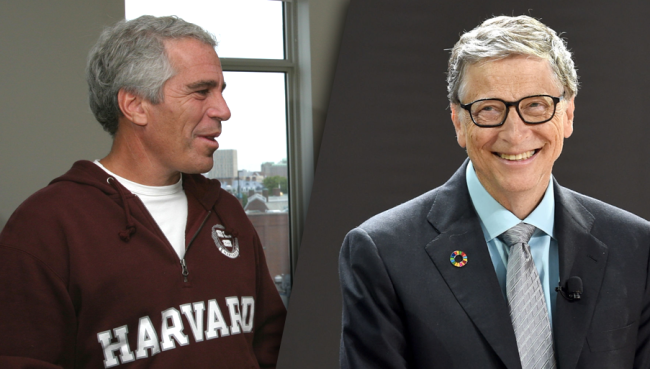 As Jeffrey Epstein’s former associate slash alleged pimp Ghislaine Maxwell awaits her trial (which was supposed to take place in July), the late convicted pedophile is back in the news thanks to a new interview with Bill Gates on the PBS Newshour.

Bill Gates reportedly began a friendship with the convicted sex offender in 2011, three years after Epstein had already pleaded guilty to soliciting prostitution from a minor.

“It was a huge mistake to spend time with him, to give him the credibility of, you know, being there,” said Gates. “You know, there were lots of others in that same situation, but I made a mistake.”

Fast forward to Tuesday night and Gates was on the PBS Newshour to discuss his $1 billion clean energy program when host Judy Woodruff took the interview in a direction that Gates was visibly uncomfortable going.

“I also want to ask you about something else in the public arena, it was reported at that time, that you had a number of meetings with Jeffrey Epstein—who, when you met him ten years ago, he was convicted of soliciting prostitution from minors,” Woodruff said to Gates.

“What did you know about him when you were meeting with him—as you’ve said yourself—in the hopes of raising money?”

“You know, I had… dinners with him… I regret doing that…” Gates answered, clearly shook by the question.

“He had relationships with, uh, people he said, you know, would give to global health, which is an interest I have,” Gates continued.

“You know, not nearly enough philanthropy goes in that direction. Uh, you know, those meetings were a mistake. They didn’t result in what he purported, and I cut him off,” Gates said. “You know that goes back a long time ago now. I just… so there’s nothing new on that.”

Woodruff followed that question up with another one about the timeline of Gates’ relationship with Epstein.

The Daily Beast reported back in May that Bill Gates met with Epstein as recently as 2014 and even flew on Epstein’s private plane, the Lolita Express, in 2013.

“It was reported that you continued to meet with him over several years, and that, in other words, a number of meetings,” Woodruff said, causing Gates to fidget and quickly look off-screen at someone.

“What did you do when you found out about his background?” Woodruff followed up.

“Well, you know, I’ve said I regretted having those dinners, uh, and there’s nothing… there’s absolutely nothing new on that,” said an obviously annoyed Gates.

“Is there a lesson for you… for anyone else looking at this?” asked Woodruff.

“Well, he’s dead, so, uh, in general you always have to be careful,” Gates replied.

“And, you know, I’m very proud of what we’ve done in philanthropy. Very proud of the work of the [Bill and Melinda Gates] Foundation, you know. That’s what I get up every day and focus on.”

Watch the entire interview below in all of its cringeworthy glory.

In related news, Prince Andrew was finally served his court papers this week after refusing to cooperate with American authorities in relation to the sexual assault lawsuit filed by alleged Esptein victim Virginia Roberts Giuffre.