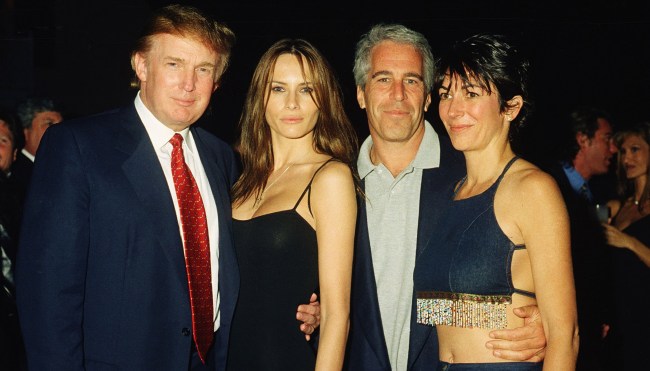 It has been reported multiple times that Jeffrey Epstein’s longtime associate and alleged madam Ghislaine Maxwell has a secret “stash” of tapes which would incriminate numerous high-profile individuals.

Maxwell has reportedly been prepared to “name big names” in an effort to lessen the sentence she is almost sure to get once she goes to trial in July of 2021 on charges relating to trafficking minors for sex as well as perjury.

Apparently, the British socialite wasn’t very careful about who she shared this information with as she reportedly bragged to a socialite friend at one point, “Jeffrey Epstein and I have everyone on videotape.”

Now, former CBS producer Ira Rosen, says he too was told about the existence of damaging video tapes by Maxwell.

In his just released book, Ticking Clock: Behind the Scenes at 60 Minutes, Rosen claims that Maxwell admitted to him that not only did she and Epstein have secret tapes of Donald Trump, they also have tapes of Bill Clinton.

He says he told her, “I want the tapes. I know he (Epstein) was videotaping everyone and I want the tapes of Trump with the girls.” To that, Rosen claims Maxwell responded she didn’t know where they were, to which Rosen emphasized the prospect of Trump possibly winning the presidency if the alleged tapes didn’t come to light.

He claims Maxwell then looked him dead in the eyes and said the following — “I am the daughter of a press baron. I know the way you people think. If you do one side, you must do the other. If you get the tapes on Trump you have to do Clinton.”

Rosen claims Maxwell then said it was all pointless, because Hillary was way ahead in the polls at the time, so there was no need for the story to come out. Beyond that, he claims she told him Epstein never disclosed to her where those alleged tapes were, so she couldn’t even get to them if she wanted.

Both men, who have each been photographed with Epstein multiple times, denied having participating in any of the convicted sex offender’s underage trafficking ring.

Related: The Deposition Ghislaine Maxwell Didn’t Want Released Has Been Unsealed And It Is Wild

Remember this? Bill Clinton seen with Chauntae Davies, a victim of Jeffrey Epstein. The news even reported on this, still not enough people at all cared. Everyone who turns a blind eye to all that is already known about the elite will regret it someday. pic.twitter.com/kgddCFLQFg

Rosen also claims, according to DailyMail.com, that in 2014 Maxwell told him that if he came inside the Four Seasons Hotel in New York with her and slept with her she would tell him the “secrets” of her father Robert Maxwell, the disgraced British newspaper tycoon who died under mysterious circumstances in 1991.

Maxwell, who fears she will be assassinated in prison as she believes Epstein was, has reportedly been desperately trying to keep “highly confidential information” out of court.