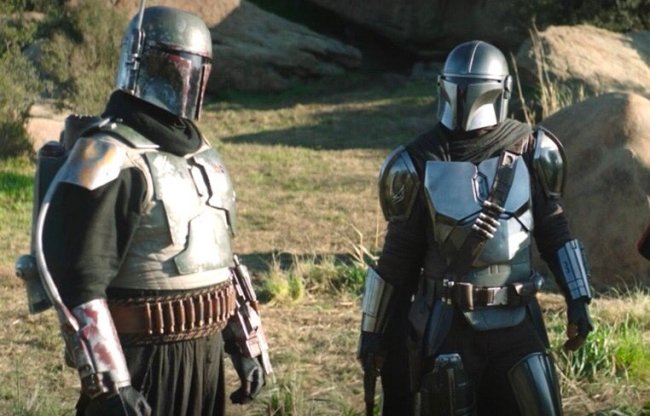 During an appearance on Good Morning America on Monday morning, The Mandalorian creator and writer (and general genius) Jon Favreau confirmed that the newly-announced The Book of Boba Fett is NOT just the third season of The Mandalorian and will actually be its own separate spin-off series that’s set within the same timeline as Mando’s recent outings.

In addition to announcing that the series will be its own self-contained spin-off set within the timeline of The Mandalorian, it was confirmed that Favreau, Dave Filoni, and Robert Rodriguez — who directed the Boba-centric episode “The Tragedy” — will be executive producing the series. Just like they did in The Mandalorian, Temuera Morrison will star as the legendary bounty hunting Boba Fett, while Ming-Na Wen will co-star as Fennec Shand.

“We didn’t want to spoil the surprise during the big Kathleen Kennedy announcement of all the shows, so they let me keep this one a secret, ” Favreau says. “So this is actually separate from The Mandalorian season 3. But what we didn’t say in that announcement is the next show coming up — what Kathy called ‘the next chapter’ — is going to be The Book of Boba Fett, and then we go into production right after that on The Mandalorian, back with the main character that we all know and love … pretty soon following that. There’s a lot of Star Wars content coming out, I think they announced 10 projects, I think this will be 11.” [via Good Morning America]

Truth be told, can’t believe anyone thought this wasn’t the case.

Imagine #TheMandalorian spending 16 episodes developing Din Djarin into a character the audience legitimately loves only to toss him by the wayside. Was never gonna happen. pic.twitter.com/AGkegkd1uI

Given that the two series are likely using the same high-tech California production studio (The Mandalorian has more or less ushered in a new filmmaking technology), it makes sense that they’d be unable to film simultaneously.

While Boba Fett has been widely (and almost irrationally) popular amongst Star Wars fans ever since he debuted in 1980’s Star Wars: The Empire Strikes Back, The Book of Boba Fett will mark the character’s first solo project.