Apparently, Brad Pitt And Kanye West Have Been Bros ‘For A While’ 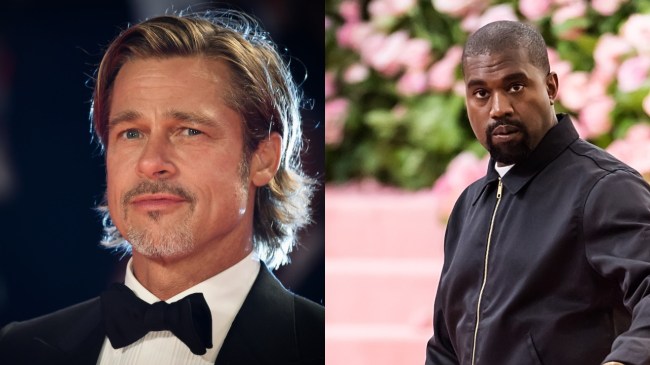 Look, I’m not even going to pretend that I enjoy Kanye West these days. Not only is he a Trump-supporting egotistical maniac, but he hasn’t made decent music for the better part of a decade.

Ever since 2010’s My Beautiful Dark Twisted Fantasy — which, admittedly, is a masterpiece — West’s discography has amounted to nothing more than organized noise, as Yeezus, The Life of Pablo, and Ye all fail to even sniff the heights of his previous albums, especially when comparing them to the likes of The College Dropout, Late Registration, and Graduation.

And yet, for whatever reason — most likely his overrated shoes and overblown marriage to Kim Kardashian — Kanye West, unfortunately, remains as relevant as ever.

In fact, West remains so firmly on the A-List of Hollywood that Brad fucking Pitt even showed up to his most recent Sunday Service, because apparently, the two have been friends for “a while”.

“Kanye and Brad have been friendly for a while. There’s definitely a common respect between the two of them. Kanye has always been a big fan of Brad,” a source told PEOPLE.

What’s the middle ground that these two wildly different celebrities have met on, you ask? Children, of course! According to the PEOPLE report, the pair have “found a common bond over fatherhood and enjoy each other’s company.”

Imagine being a fly on the wall during a conversation between these two.

Brad: “Well, you’ve got Maddox, Pax, Zahara, Shiloh, Vivienne and Knox… really just a bunch of crazy shit my wife came up with.”

Hollywood, man — all it takes for a friendship to form is having your wife name your children something ridiculous.