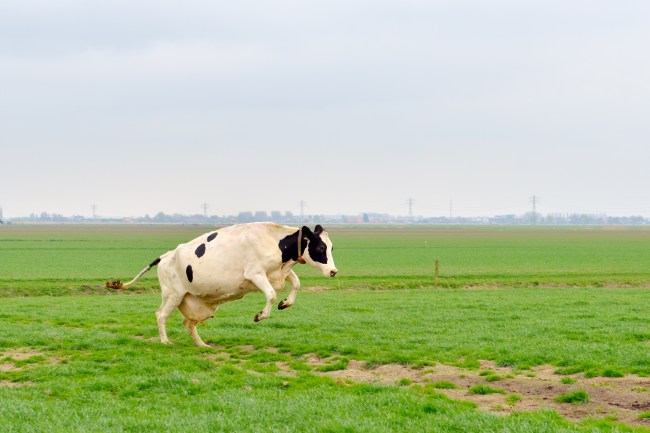 A mischievous Brazilian cow has a new home after escaping slaughter earlier this month. The cow, which was set for slaughter in coming weeks, made a mad dash from a cattle ranch about 500 miles west of Rio de Janeiro.

After getting his first taste of freedom, the cow ran to a nearby water park. The park was empty and the cow made its way over to a water slide.

It climbed the stairs to the top of the slide and was stuck. Cows are not willing or able to go down stairs.

Thus, with only one way down, it decided to go for a ride on the tall flume. However, the slide is only designed to hold 450 pounds.

Fortunately, the slide held firm under the cow’s roughly 700-pound weight as it awkwardly trotted down on its knees. Video shows the adventure-loving bovine doing its best to shift its weight down the twisting bend and down into the pool below.

Soaking up its freedom after the bizarre escape, the cow took a moment to enjoy the empty water park before eventually being captured. Following its capture, the cow was given a second lease on life.

A ranch owner near Rio de Janeiro adopted the adrenaline junkie cow and named it Tobogã, which is the word “slide” in Portugese.