In Honor Of Lou Williams, These Are The BroBible Staff Picks For The Best Foods In Hopeless Places 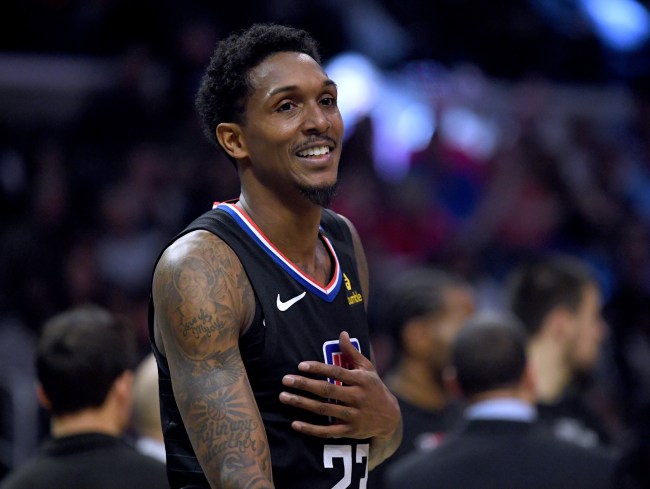 Humanity is forever indebted to Lou Williams for not only shining a spotlight on Magic City Gentlemen’s Club divine chicken wings, but also arming men with the now bulletproof excuse: “Honey, I swear I just spent Tuesday afternoon at the titty bar for the (chicken) breasts.”

Leave it to the guy with two live-in girlfriends to save millions of marriages across the nation.

Make fun of Lou Williams' +/- of (-47) all you want, my dude got 2 girlfriends he never takes an L. pic.twitter.com/hllVtUYA5R

But Lou’s now iconic rendezvous with S.C.W. (Strip Club Wings) has taught us something even more profound: Prejudice and stigmatization have no place in the culinary industry. One really can find love in a seemingly hopeless place.

With this enlightened mindset, I enlisted the minds of my fellow BroBible colleagues to illuminate the unheralded items that transcend their places of origin.

So without further ado, I present to you BroBible’s Dumpster Diving Delights. 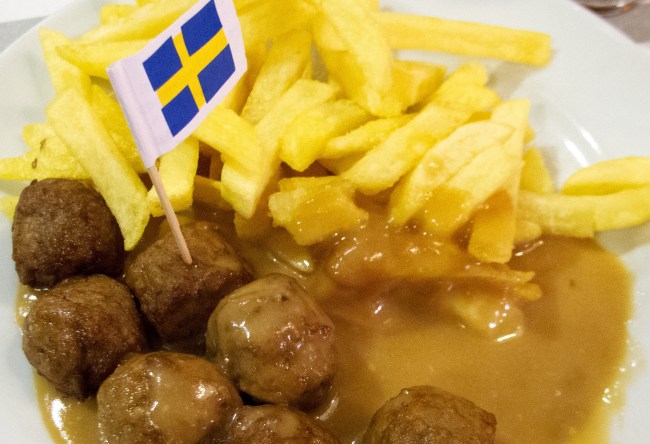 Anyone who’s spent an afternoon dragging their feet around this furniture retail giant knows that a full belly is a prerequisite for spending the rest of the day struggling to successfully assemble a plywood book case.

IKEA’s succulent and flavorful Swedish meatballs serve as one’s final meal before sending his manhood to the electric chair, which itself comes in 16 separate pieces.

It is confirmed, IKEA meatballs are the best thing to come out of Sweden since ABBA. 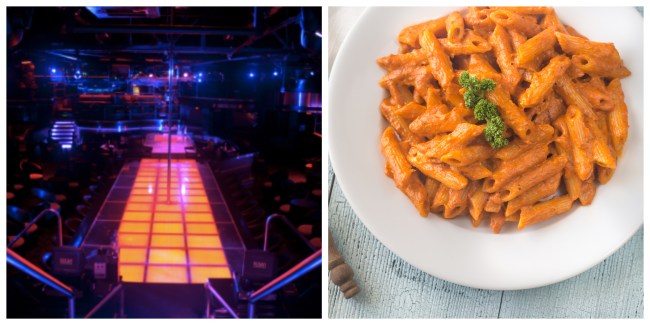 Branded as Philadelphia’s “Premiere Gentlemen’s Club and home to The World’s Most Beautiful Showgirls,” this respected institution is far more than that.

One bite of the enchanting penne vodka and you’ll be transported from that windowless glitter factory to the rolling hills of Tuscany, and to a time when you still had custody of your kids.

This divine dish also topped the list of Food & Wine’s Magazine’s “Top 10 Dishes To Eat While Sporting An Erection,” giving you two reasons to unbutton your pants after a big meal.

The breakfast sandwich from @Five_Guys is absurd. Also delicious. pic.twitter.com/Pitl4tOnGh

But if you’re willing to ruin your entire day just a few hours earlier, you can score yourself a gut-busting Bacon, Egg & Cheese Sandwich with grilled onions and grilled mushrooms. Five Guys incorporates the sesame bun in this seductively sloppy menu offering to set it apart from the pack, and for a small additional fee, will even phone an ambulance when you go into cardiac arrest. 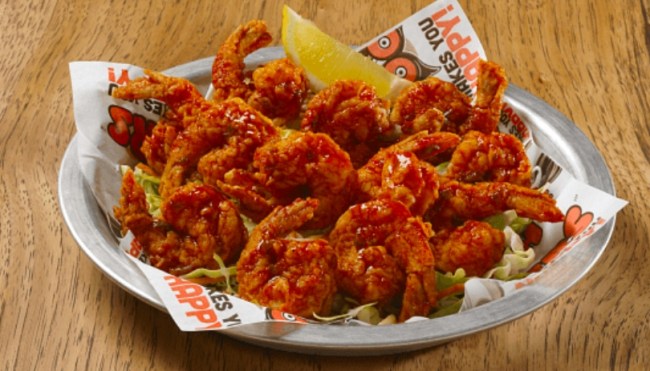 I had to include this contribution from Cass’ wife because it sang to me.

Buffalo shrimp may be one of the last things one would consider ordering off the menu, behind the boneless wings, the 10th Miller High Life, and the waitress’s phone number, but do not sleep on these spicy crustaceans.

Plus, one should never take a menu recommendation lightly from someone who actually works at the restaurant. Boom roasted Cass’ wife. 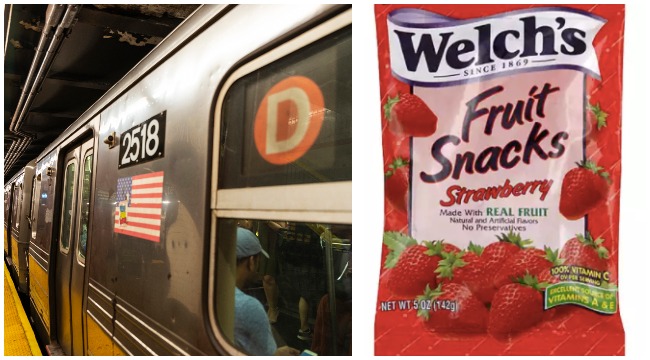 Anyone who’s lived in New York knows that the most one can expect from riding the subway is the pungent aroma of human feces, a kick in the face from an amateur pole acrobat, and the unwanted eye contact of a domestically challenged man pandering for Hamilton tickets.

If you’re one of the lucky ones, you’ll encounter a person too young to be riding the subway solo, selling delectable Welch’s fruit snacks to raise money for his middle school basketball uniforms. The snacks (MADE WITH REAL FRUIT) are not only a pleasant reprieve from the hell, but also an opportunity to become a minority owner in a basketball team after a short-lived NBA career. 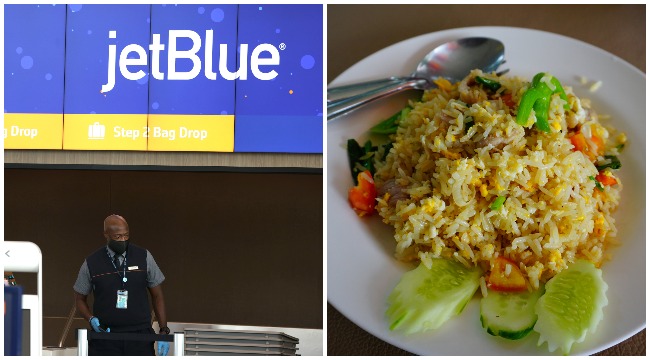 Francis grew up in one of those “healthy families” in Maine who put soy milk in their diet Kashi cereal and kissed each other on the lips. In his defense, it’s easy to say airport crab is delicious when it’s the very first thing you ate after being shipped away by Social Services.

But old habits die hard, and unfortunately the ghost of Francis’ past continues to haunt him in the form of a sack of dried fruit.

I ate an entire family-size bag of dried mango last night. I couldn't stop eating it. I was high. I told myself that because they were dry, it wasn't bad for me. Natural sugar, nbd.

Woke up at 4AM with my stomach screaming. I've had failed surgeries that weren't this bad. Help?

If you’re wondering how an otherwise reasonable man chooses dried fruit as his munchies binge, you’ve never grown up blowing birthday candles out of a rice cake. 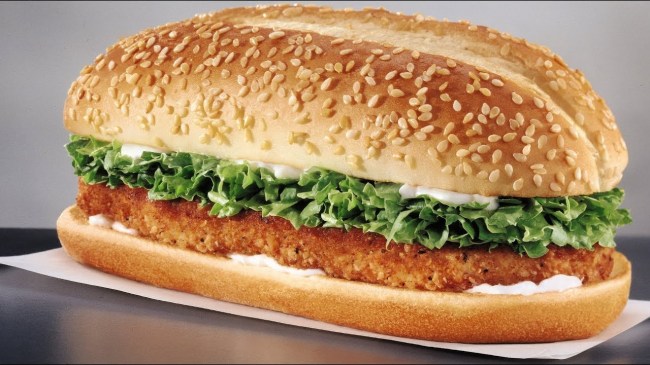 What’s the first menu item that comes to mind when I type ‘Burger King’? Okay, now the one hundred and eighty third?

Yes, my friend: The Burger King Chicken Sandwich, named with no more effort than it deserves.

This chicken sandwich is food equivalent of a Bengals/Browns Thursday night game. You’ll consume it, but only because its your only option.

I respect Eric immensely, but this ain’t it.

The best supply chain and marketing strategy in America.

Kirkland Signature—from trampolines to dress shirts to hot dogs—the most diverse brand in the game.

I was going through some shit.

The absolute best place to go after a hot-boxing your ’99 Camry because you can order all your food on a touch-screen and avoid speaking with other human beings. That cannot be understated. Long live Wawa.

There you have it folks! WHAT DID WE MISS!?