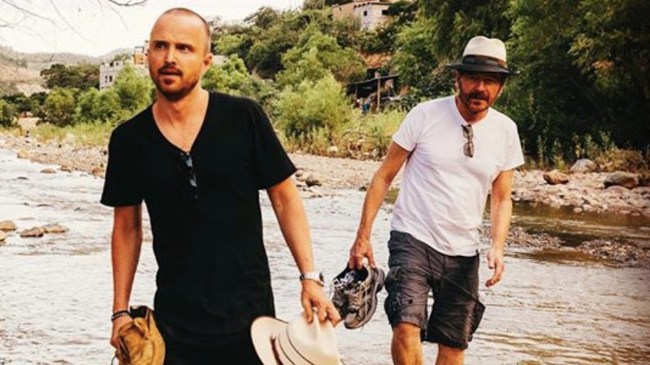 To quote Gambol from The Dark Knight (this is kind of a super deep cut so apologies if you don’t understand the reference): “Enough from the clown!”

That’s essentially how I feel every time Bryan Cranston or Aaron Paul post one of these frustratingly vague yet exceedingly exciting Breaking Bad movie teasers to social media.

Just a few months ago, Cranston — who recently won a Tony Award for Best Actor — was playing utterly coy about his role in the Breaking Bad sequel, rarely giving a concrete answer when asked about his involvement with the film.

“I’d love to do it” or “I’d be happy to appear” were just some of the benign soundbites that Cranston was producing as he was constantly questioned about the project whenever he’d make a public appearance.

Just a week after he and Paul both dropped a Donkey-themed teaser on their respective Instagrams (at the same time, mind you), the pair are back at it again, this time posting of a picture of the two TOGETHER with the caption “even sooner”.

As for what the two of them being together actually means, it means that their characters are almost guaranteed to be sharing scenes together in the upcoming sequel film.

While the context of their scenes together are likely being kept under lead-lined wraps, given Walter White’s apparent fate in the Breaking Bad finale, they can only go in one of two directions: Walter actually somehow lived (which would be kind of shocking for a series as notoriously grounded as Breaking Bad) and will factor into the forward narrative of the film, or the scenes will be flashbacks of the two iconic characters during their meth-cooking days.

Either way, just knowing that there’s more Walt and Jesse action in our future is a gift in and of itself. If it wasn’t real before, the hype is officially real now.