Is Burning Nike Gear Over The ‘Satan Shoes’ Nike Didn’t Even Make The Dumbest Protest Of All Time? 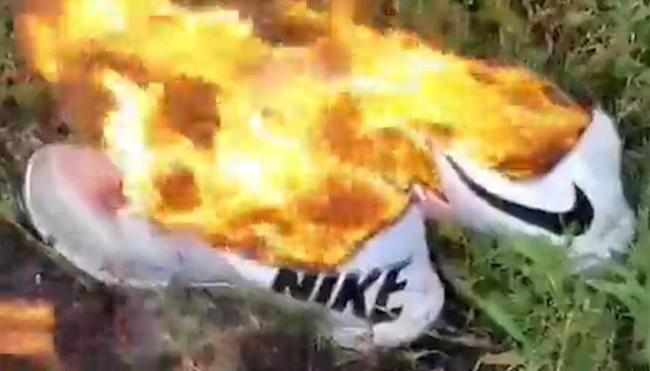 As someone who’s worked deep in the trenches of the internet for over a decade, it took me far too long to realize there’s no real use in arguing with people online who’ve made it clear they’re willing to die on some of the dumbest hills imaginable, as trying to get them to change their mind is almost the ultimate exercise in futility.

Unfortunately, there’s no way for me to reclaim the countless hours of my life that were wasted as a result of lengthy debates on Facebook and contentious exchanges with anonymous strangers on message boards who hand out death threats like they’re condoms at an STD clinic. Thankfully, I not only realized the error of my ways but discovered life is so much more enjoyable when you sit on the sidelines and watch internet drama unfold instead of embroiling yourself in it.

If you’re a particularly astute reader, you may have noticed I used the word “almost” in the opening paragraph. Why? Well, even though attempting to get someone on the internet to admit they’re wrong is an incredibly fruitless endeavor, it’s not as pointless as the form of protest some people are turning to after Lil Nas X released the “Satan Shoes” that ignited a firestorm of controversy.

If you’ve somehow managed to avoid this saga, Lil Nas X recently dropped a music video where he gives the Devil a lap dance and followed up the release by announcing he’d teamed up with a company to produce 666 pairs of custom Nikes that each contained a single drop of human blood. That did not sit well with the many, many people who seem to genuinely believe Satanists possess the talents required to conjure demons from the fiery pits of hell in order to thrust the world into chaos (which you think they would’ve done by now if that was indeed the case.)

George Carlin once said you should “never underestimate the power of stupid people in large groups” and I can’t think of a more appropriate way to sum up this controversy, which resulted in plenty of sanctimonious pearl-clutchers threatening to boycott Nike. What they failed to realize was Nike issued a statement shortly after the shoes were revealed to clarify it had no role in their production and made it clear it was just as shocked as everyone else (Nike even filed a lawsuit against the company Lil Nas X teamed up with.)

However, it appears not everyone got the memo—including Jon Jones, who hopped on Twitter to let everyone know he was planning on burning all of the shoes he owns made by the company that, again, had nothing to do with the stunt.

Tomorrow morning I’m going to burn all my Nike shoes, you will never catch me in that shit again

Shortly after, the UFC fighter inadvertently admitted he hadn’t done any research before issuing that proclamation (which is sort of like burning a player’s jersey because you heard a rumor they’d signed with another team without bothering to confirm it) and walked back his threat after the lawsuit came to his attention.

OK, now I’m seeing there is a lawsuit. Glad to know Nike isn’t behind this bullshit.

However, Jones is far from the only person who’s threatened to give their Nike gear the same treatment Kevin gave Joe Pesci’s hat in Home Alone, as these tweets are just the tip of the misguided ire iceberg.

I am literally about to burn all my @Nike products

I thought people burning Nike apparel in response to Colin Kaepernick was overkill, but truly it’s time to burn all Nike stuff I have.

I want to burn every pair of Nikes I have..

So Nike wants to make a line in the sand with their new Satan shoes?

You got it. You are a dead company to me.

Nike has just chosen it's niche..
Time to burn some nikes.. https://t.co/lrWayJfkSc

I’m going to burn all my Nike shoes today. They will never see another penny from me.

As a result, we now have an infinitely dumber version of the fallout stemming from Nike’s decision to team up with Colin Kaepernick a few years ago that saw people rounding up pieces of apparel they’d already bought before dousing them in lighter fluid and setting them ablaze. However, even if you think those protests were the epitome of a self-own that had no tangible impact on Nike’s bottom line, you have to acknowledge there was at least some justification behind what you could argue was a symbolic form of dissent.

The same can’t be said for the people who are taking the same course of action in response to the Satan Shoes, which—and I cannot stress this enough—Nike had literally no involvement with (unless you think the company deserves to be held responsible for producing the sneakers that were used as a template almost 25 years ago.)

Despite how many people have hopped online to announce their plans to burn all of the Nike stuff they own, there’s a noticeable lack of proof that anyone actually made good on their promise. With that said, there’s at least one person who followed through by burning some kicks that honestly needed to be burned anyway.

There is another video I’m not going to link to because I’m pretty sure the kid who recorded isn’t actually old enough to have his own YouTube channel, but I couldn’t help but laugh after he definitively pledged to burn all of the Nike he owns before immediately turning the camera to a collection of Derek Carr jerseys he’s decided to spare because “they were super expensive.”

I might not understand the thought process behind the decision to incinerate things you already spent money on to prove some sort of point, but at the end of the day, the fact that you own them means you’re well within your right to torch them—just like I’m well within my right to point and laugh at you when you realize you’d made a huge (and easily preventable) mistake.