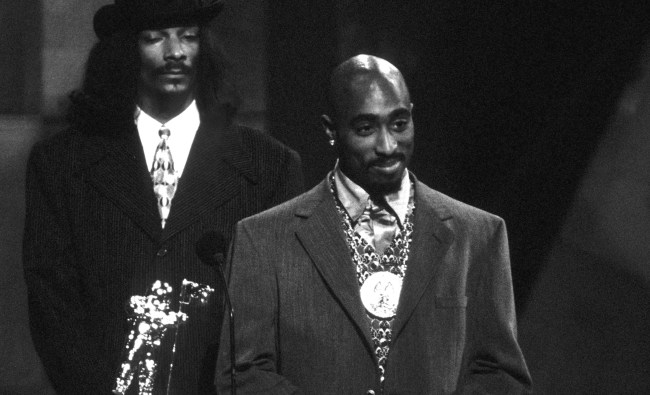 It’s been 24 years since legendary rapper Tupac Shakur was shot and killed in Las Vegas after the Bruce Seldon vs. Mike Tyson fight.

And while almost two and a half decades have passed, the impact the man also known as Makaveli had on society and the music community is still being felt today.

Stories involving Tupac are still being told today by the many people whose lives he touched or influenced.

Counted among those people are Busta Rhymes, who told a wild story about the man during an interview with Fat Joe this week.

“I had an incredible relationship with Pac,” Rhymes told Joe. “Me and Pac been friends from early Leaders days. Before he put out his sh*t, when he was still dancing with Digital Underground.

“Interesting story about one of the early Pac interactions,” Busta continued. “We had a college date to do, to do a show at one of the colleges. Digital Underground was performing and Leaders was performing. We only on our first album, and we had to do soundcheck. So we get to the soundcheck a little late, Digital had already done their soundcheck. I think Pac and Money B was still in the neighborhood.

“We getting ready to do the soundcheck, but the soundman was on some bullshit,” continues Busta. “He’s shutting sh*t down and acting like he’s getting ready to leave. We kinda on some ‘Damn, we really want to get this soundcheck done.’ The crazy thing is that Pac saw there was a little bit of friction going on and he just came and involved himself in the situation. Pac turned to this white man and he was like, ‘Yo, I need you to cut this motherf***in’ sound board on. Leaders of the New School are going to get their soundcheck done, right now. F*** you talking about you ain’t turning on the equipment?’

“He just started spazzing on dude,” he continued. “The man wasn’t trying to hear what Pac was talking about, so Pac just ran up on this motherf***a and started choking him. ‘You mothaf***a!’ So we had to grab Pac, cause we ain’t askin’ for all of this, we just want a soundcheck! This ain’t war! But that’s the type of dude Pac was. He went out of his way to extend love.”

At that point Fat Joe interjected, “Every time I seen Tupac he was in violence.”

“You know what it was, bro?” Busta replied. “It’s a little frustrating for me, but it’s the truth. I think Pac really felt, he took on more of this responsibility to have to prove his love, when he really didn’t need to. The love he felt he needed to show people, that he wanted in return, he was already getting it. I don’t know why he felt the need to go above and beyond to the point where he would get himself in trouble, just to prove to somebody he got love for them. That’s what ended up getting him killed.”

Check out the entire conversation between Busta Rhymes and Fat Joe below.