Mike Tyson Talks About Tupac Visiting Him In Prison, Wanting To Rob Cus D’Amato And Asks Why His Daughter Dates White Guys 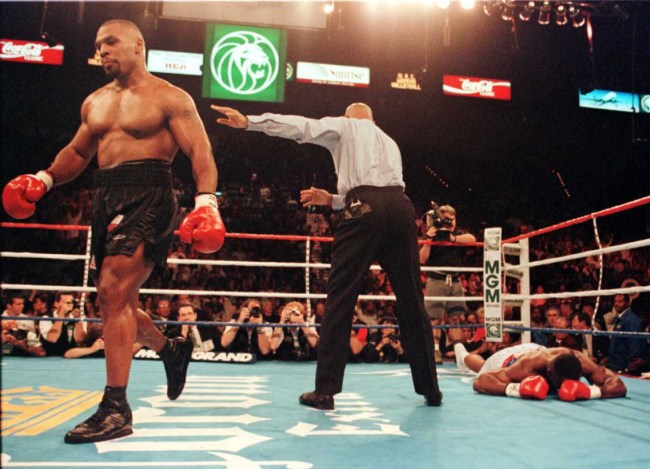 Mike Tyson and Tupac Shakur will always be linked in history because of the rapper’s tragic death occurred following the prolific boxer’s heavyweight fight. But one of Iron Mike’s favorite Tupac memories is when the Hit Em Up rapper visited him when he was in prison.

Tyson first met Tupac Shakur in the early 1990s, and it was because the then-unknown rapper couldn’t get into a nightclub. Tyson appeared on DJ Whoo Kid’s The Whoolywood Shuffle podcast in October 2018 where he went in detail about first meeting Tupac and breaking down into tears talking about the iconic rapper’s sudden death.

Tupac, who was not the legendary rapper at the time, was unable to get access to the packed club along with his 50-person entourage. Tyson heard about the rapper’s posse not being admitted into the venue, so he convinced the building’s management to let Tupac and his crew inside. Then, 45 minutes later, Tupac was “on the mic, rockin’ the club,” according to Tyson. “Pac was dope that way,” Tyson noted.

“He wasn’t famous then. Then he’s famous when I get locked up, so he wrote me. He appreciated me letting him in [the club]. Then he visited me and we started talking,” Tyson said. “The next time I see him, I’m in prison.”

Mike Tyson appeared on T.I.’s ExpediTIously podcast this week and expounded on the time 2pac visited him in prison.

In July of 1991, Tyson was arrested on the charges that he raped Desiree Washington, 18-year-old Miss Black Rhode Island, in an Indianapolis hotel room. On March 26, 1992, the then-25-year-old Tyson was sentenced to six years in prison and assigned to the Indiana Youth Center. Tyson would serve three of his six-year prison sentence before being released in 1995.

Tupac visited his boxing friend back in the early 1990s, yet the 53-year-old Tyson still remembers the visit to this day, and it is his fondest memory of Pac. “He was so excited, so animated. Then, all of a sudden, he jumps on the table,” Tyson of Tupac’s visit. “The cops, the guards are looking at him and I’m like, ‘Come down, get down from there. Come here. Come down now.'”

“The guards in the prison didn’t like him cause when he came, the inmates got rowdy and pumped up,” Tyson said of Pac. “That’s like a safety situation there so they really didn’t like him.”

“He had mad respect. I guess that’s how he lived his life, he demanded respect,” Tyson said.

“He was just a bolt of energy,” Tyson continues. “When he came in, everybody knew him. He had mad respect. I guess that’s how he lived his life, he demanded respect.”

“When the word came out he just came to visit me, and then he went out and shot two police officers, off-duty police officers,” Tyson reminisced. “Everybody in the prison went crazy! It was like a riot, everybody went crazy! He had so much f*cking power.”

T.I. asked Tyson his thoughts on Tupac, and Mike said the rapper was “like a Roman general.” “He took himself real serious. He had a great deal of self-respect and dignity,” Tyson said. “He was just an amazing guy. Ahead of his time, and that’s why he’s not with us no more. Biggie the same way too.”

“His energy’s off the wall,” the boxer said of Tupac. “Guys don’t do that no more. When I see entertainers, it’s just not that energy. Some guys sell hundreds of millions of records, but they don’t got that stuff. He had that stuff.”

“He’s just a different person,” Tyson said of Tupac. “You know when you see some people in our life, they’re like us, but they’re not like us, they’re different.”

Tyson is forever bound to Tupac Shakur because the rapper died hours after attending the heavyweight fight with Iron Mike and Bruce Seldon in Las Vegas at the MGM Grand in September 1996. Tupac would be shot four times in what would be a lethal drive-by as Shakur died six days later on September 13, 1996, at the age of 25. Tupac’s murder is unsolved to this day.

Also in the interview with Tip, Tyson said that he was arrested over 40 times before he hit the age of 13. Tyson said his first goal he ever made was to run 10 miles, which took him about a month to achieve.

Tyson said being a “champion is a lifestyle.” He added that he “was no champion when he held the heavyweight belt.” “A champion has to be beat up too,” Tyson told Tip. “You can’t be a champion unless you’ve been beat up and dragged in the dirt and kicked in your balls.”

Mike Tyson said at the peak of his career as a boxer that he had a net worth of a “couple hundred million,” and estimated that he had $400 million.

Tyson said he only fought once when he was high from marijuana, his 2000 fight against Poland’s Andrew Golota. Despite smoking weed, Tyson dominated and Golota didn’t make it to the third round. Iron Mike earned a technical knockout, but it was later changed to “no contest” after Tyson tested positive for cannabis following the fight.

Tyson said he first got interested in getting into the cannabis industry after his brother-in-law opened a few marijuana dispensaries. The former heavyweight champ is opening a weed ranch named “Tyson Ranch,” a reefer resort in the Mojave Desert with an edible factory, amphitheater and glamping campgrounds.

Of his hometown of Brownsville, Brooklyn, Tyson said: “If you ain’t ever killed anyone, you nothing.”

Mike Tyson then revealed that he once thought about robbing his boxing manager and father figure Cus D’Amato.

“Then I started boxing. Once I met Cus, I was gonna rob them too. That’s who I was. I was like, ‘Wow, these white people have all this sh*t.'” Tyson said his life with his mentor was like the Eddie Murphy movie Trading Places.

“This guy showed me all of my good qualities and told me what I can do and made me believe in myself,” Tyson said of Cus. “First, I believed in him, and then he made me believe in myself, and I go from being the guy with the lowest self-esteem to thinking that my name should be ranked with Alexander the Great and Achilles. How does that happen? How does this guy that is a piece of sh*t that comes from nothing that doesn’t think nothing about himself think he has the nerve to be ranked with Alexander the Great?”

Tyson brought up why he has always been married. “That’s why I got married three times cause I can’t live without a wife. If I don’t have a wife, I’ll kill myself. I need somebody to listen to. I’m just that person. I’m a soldier. I can’t think on my own. I need someone to listen to. On my own, I’m violent.”

Tyson asked a question about his children. “Know what bothers me? Why my kids don’t like black kids? My kids don’t date black kids? Why is that?” Tyson asked Tip. T.I. responded that their kids “attend Ivy League schools from the time they’re small, they communicate with the kids that they’re around, and most of those kids are gonna be little white kids.”

Tyson said his daughter is “attracted to white guys,” and he believes he “didn’t set a good example as a black man.” “They must have seen me sometime when I was vulnerable and say, ‘Hey, I don’t wanna be with nobody like that.'”

Tyson said the most humbling experience of his life was losing his young daughter when she died on May 25, 2009, when she was only four-years-old.

Tyson also discussed meeting Michael Jackson, but the King of Pop didn’t know who Tyson was and Mike took it personally. They met a second time and this time went much better as they hit it off.