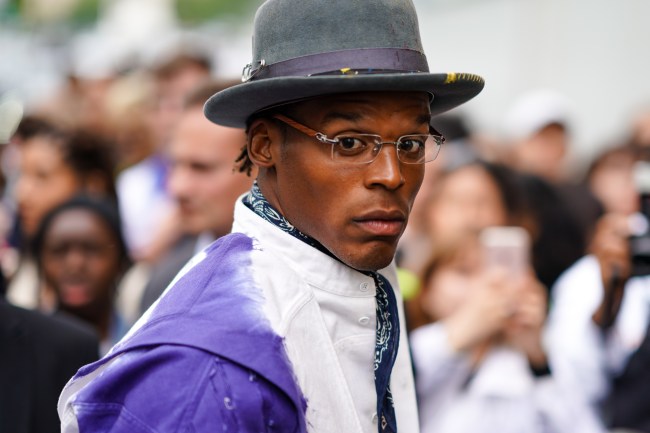 There may no athlete on the planet I have less in common with than Cam Newton.

He’s a freakish professional athlete, I smoke cigarettes at halftime of my men’s league games.

He is a vegan, I get violent in the absence of meat.

He is a Christian, I go to church for the wine.

He wakes up at 4:20 am every single morning, I haven’t met an alarm I haven’t snoozed.

He spends hundreds of thousands on clothes he only wears once, if it ain’t free it ain’t for me.

Sunshine isn’t the only thing brightening things up today at Gillette Stadium (via IconicSaga on Instagram). pic.twitter.com/OkrnAZbwPq

If I showed up to work like this, HR would try to institutionalize me.

Cam and I may finally find something in common as the 31-year-old quarterback claims he is tampering down his lavish retail eccentricities in favor of dumpster diving like the rest of us, as shopping is a “stress diffuser” for him.

“I’ve spent thousands and thousands of dollars, maybe even millions of dollars on clothes that I only wore once, so to be able to recycle the closest, so to speak, is something that’s challenging. But at the same time, it’s going to be fun to do so throughout this whole year.”

Newton’s announcement comes four months after Jeff Garcia blasted him for dressing to the nines after playing like doo doo.

Cam Newton has struck a nerve with Jeff Garcia pic.twitter.com/WXWvhtmClP

This may mean that the man who crafts a custom hat for Newton every single week may have to update his resume.

I hope Cam doesn’t start dressing like Peyton Manning because some of his outfits belong in the Louve.

Cam Newton turned up in a cosplay outfit of the villain from Raiders of the Lost Ark at his press conference. #NFL pic.twitter.com/QMKQa6khjI

Week 2: scarf with the glasses and a beautiful navy blue suit: 11/10 pic.twitter.com/CJCxqjUNiU