Is It Legal To Drink In A Car If Someone Else Is Driving? You Can In These Lucky States 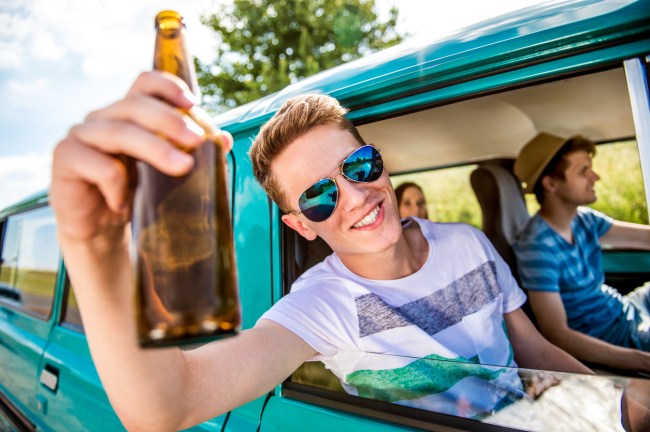 If you’re like me, it took you a little bit of time to get college out of your system after graduating. It might take a while but most people eventually come to the realization that you’re not going to get too far in life if you make a habit out of duct-taping two 40s to your hands on a Tuesday night.

However, some old habits die hard. There’s something to be said about reliving the glory days every once in a while, which is exactly what I got to do when I attended my college reunion last year.

Prior to the trip, I decided I would fully embrace my inner degenerate and revert back to my college days as I prepared my body for a weekend fueled by cheap booze and poor decisions.

Unfortunately, I’d have to endure a four-hour drive from New York City to Boston before I was able to get my drink on— or at least that’s what I thought until I did some digging and struck gold in the process.

The day before the trip, I decided to look up whether or not it’s legal to drink in a car if someone else is driving. Based on my knowledge of open container laws, I figured it was a bit of a longshot but I quickly discovered I’d hit the jackpot.

According to FindLaw, Congress passed the Transportation Equity Act for the 21st Century in 1998, which rewarded states for banning open containers in a vehicle with extra federal funding.

40 states (and Washington D.C.) would eventually adopt the federal legislation but there were some holdouts who decided to do things their own way and make road trips a lot more enjoyable in the process.

While some states have exceptions for limos, party buses, and other private forms of transportation, there are currently seven that allow passengers in a “normal” car to drink alcohol while someone else is driving.

The majority of my trip up north took place in Connecticut, and with this newfound knowledge in hand, I made my former roommate stop at the first liquor store over the border and rang in the weekend by finishing a six-pack by the time we hit Massachusetts.

My buddy didn’t get the chance to imbibe behind the wheel but it turns out he could have if we’d been traveling through Mississippi, which has the most lenient laws in the country; a driver is actually allowed to consume booze while operating a vehicle assuming they remain under the legal limit.

It’s worth noting local ordinances can override state laws so you might want to do a little bit of research before shotgunning a cold one while riding shotgun.

With that said, I hope this information changes your life the same way it changed mine.