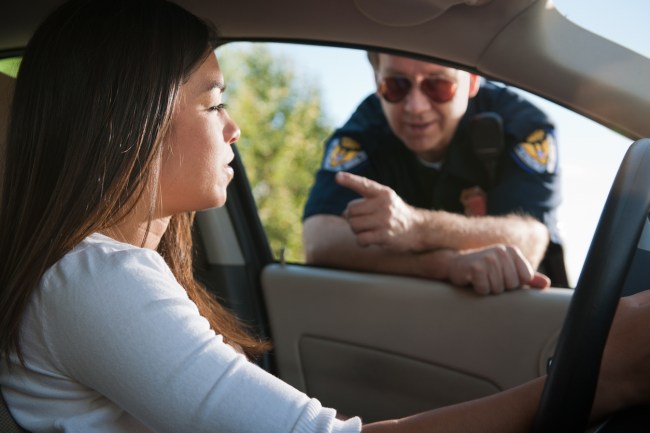 If you’ve ever wanted to flip off a police officer after they wrote you a ticket for some dumb shit you “allegedly” did, you should know that the U.S. Constitution protects your right to do so, a federal court confirmed earlier this week.

That’s right boys; there are no laws that prohibit the citizens of this fine country from giving cops the finger to express disdain for their actions or authority in general.

Sure, there isn’t an officer on the planet who isn’t going to take offense to the ever-so-popular “go fuck yourself” gesture and try to get all redneck about it, but let them cry it out over a donut after their shift.

The courts have ruled that cops cannot pull a motorist over for using this vulgar extremity, and they sure as shit cannot take them to jail for it. Indeed, it is times like these when we are reminded that America is already pretty great!

This badass verdict stems from a case involving a Michigan woman by the name of Debra Cruise-Gulyas, who was pulled over for speeding by one of the state’s boys in blue back in 2017.

Rather than give her a ticket for driving too fast, officer Matthew Minard decided to show her a little leniency and issue a citation for a “non-moving violation,” which is a cheaper fine when it comes time to answer to the offense in court. But the officer’s roadside chivalry apparently wasn’t satisfactory enough for Cruise-Gulyas, so she gave him the finger as she sped away from the scene.

Of course, the cop, trying to be the mighty swinging dick that most of these bastards think they are, took off after her and initiated a second traffic stop because, as the court put it, “she made an all-too-familiar gesture at Minard with her hand and without four of her fingers showing.”

To punish the woman, the officer used the second traffic stop to go ahead and write her a ticket for speeding. It was his way of saying, “Fuck me? No, fuck you!” Little did he know that Cruise-Gulyas would arm herself with a lawyer and come gunning for his ass in court, arguing that her First Amendment right gives her the freedom to flip the bird to anyone she wants (and yes, that includes the police).

It’s basically the same reason that N.W.A can record a song called “Fuck tha Police” and make millions of dollars performing it all across the nation. It’s also how we can make fun of a president for being an ass-gasket without Secret Service showing up in the thick of the night to impose Nazi-style street justice.

But, as is the case with a variety of issues, many police officers don’t seem to understand their badge only gives them the authority to enforce the laws, not to go all Gestapo on people who do not respect their position.

The U.S. Court of Appeals for the 6th Circuit took the side of Cruise-Gulyas on the matter. In short, we the people do not have to respect the police. That’s just not how it works.

In the verdict, Judge Jeffery Sutton wrote for the 3-to-0 panel that “Fits of rudeness or lack of gratitude may violate the Golden Rule, but that doesn’t make them illegal or for that matter punishable.”

According to the court, it was officer Minard who actually broke the law when he took it upon himself to conduct another traffic stop to get Cruise-Gulyas back for giving him the finger. This is called “unreasonable seizure,” as he needed another legitimate reason to pull the woman over again before detaining her.

But other than using her middle finger to show a lack of appreciation for the ticket, there was none. “Cruise-Gulyas did not break any law that would justify the second stop and at most was exercising her free speech rights,” the court wrote in its opinion.

This is something that other police officers need to be aware of, the court said. There isn’t any situation where a lawsuit over a middle finger aimed at police isn’t going to go down in the same way. Americans have the right to tell cops to fuck off. Get over it.

“Any reasonable officer would know that a citizen who raises her middle finger engages in speech protected by the First Amendment,” Judge Sutton said. “Minard, in short, clearly had no proper basis for seizing Cruise-Gulyas a second time.”

Although it is legal to give cops the finger, it might not be the best approach right out of the gate. In the event of a traffic stop, it is always best to be as courteous as possible in order to avoid any unnecessary hassles, like a vehicle search for drugs (even if you know you’re clean).

As we have learned over the years, it is not out of the wheelhouse of police to plant evidence or employ other shady tactics to try and nail citizens to the wall just because they can.

If a traffic stop escalates above a simple ticket, and an officer continues their line of questioning, always ask “Am I being detained?” If they say yes, do not say another word. You have the right to remain silent. If they say no, ask “Am I being arrested?.” If the answer is “no,” you are free to go.

It is at this point where it might be appropriate to flip them off. After all, how else are they going to know if they are doing a good job or not? it’s not like cops have comment cards.