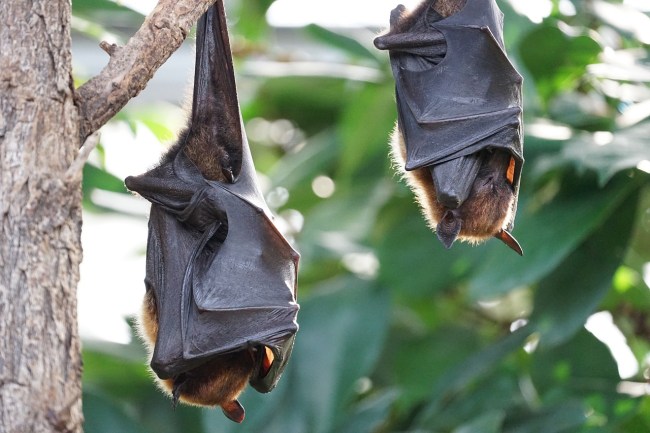 Just as we were starting to get semi-comfortable with the idea of a weird virus turning America’s deer population into a horned cult of bloodthirsty zombie killers, science sadistically kicks us in the nuts again with the prospect that wildlife—the fuzzy, little critters that are supposed to be on the lower end of the food chain—will ultimately be the culprits that exterminate uncivil society.

Forget about being transformed into a rabid specimen of human waste after an unexpected tango with a bat. These screeching, mosquito-eating spawns of Satan are now believed to be capable of spreading an evil strain of flu virus to humans.

It is perhaps the next sign from the twisted masters of the universe, one which is designed to drive home the fact that the apocalypse is crawling up our butt cracks more and more with each passing day. We hate to admit it, boys, but it’s just a matter of time before we’re all sucking on the raw dong of death. Open wide!

Yeah, yeah, we know. “You BroBible bastards can fuck right off, bat flu is nothing new.” Well, listen up, smartass. It kind of is.

When bat flu was first discovered, field geeks chalked it up to just another Influenza A virus, a perverse animal funk that infects a host by binding to specific cells and causing an infection.

But upon closer inspection, they noticed something just a little bit different about it that they couldn’t quite put their finger on. So, in an attempt to stay ahead of a doomsday situation, researchers from around the globe have spent the past six years searching for more information.

What they found isn’t good.

Researchers at the University of Zurich (UZH) say that unlike traditional Influenza A viruses, this pesky bat flu has the cunning ability to infect livestock—including chickens and pigs—as well as people through an entirely different process.

It binds to the proteins of immune cells, which “play an important role in discriminating the body’s own structures from pathogens, such as bacteria and viruses,” Muhammad Munir, a lecturer in Molecular Virology at Lancaster University, wrote in an article for The Conversation.

As far as we can tell, this means the bat flu tricks the human immune system into killing itself.

“What surprised us is that bat influenza viruses can not only use the MHC-II complexes of human cells, but also those of chickens, pigs, mice and several bat species,” lead researcher and Ph.D. candidate Umut Karakus explained in a piece for Science Daily. “The influenza viruses of bats thus have the potential to infect both humans as well as livestock, at least at the level of entering cells.”

It is no secret that bats are some of the most rotten creatures on the planet. These winged beasts are known carriers of dreaded human pathogens like the Ebola, SARS, and Nipah viruses. All of these diseases can scatter from bats directly into humans.

What makes the bat flu so damn dangerous, however, is its ability to spread through the air that we breathe. “The finding that MHC-II expression in the respiratory tract cells lets bat flu replicate, suggests that the virus could be transmitted to humans through the air,” Munir writes.

So, not only does bat flu put our food supplies at risk, making it next to impossible to devour a heaping pile of buffalo wings or pulled pork ever again without considering the possibility of being strapped to life support, the virus has the all-damning capacity to ride through the wind and savagely hump our respiratory systems into submission.

What’s really fucked up is even though scientists know bat flu can be transmitted to the human population relatively easily—the risk of this flu spreading to both livestock and people, they say, is fairly high—all of them still seem to be pretty much in the dark when it comes to the full scope of the mammals’ deviant nature.

“Such an infection has not yet been observed,” said Silke Stertz, who was also involved with the study. “However, our findings show that the viruses generally have this zoonotic potential. This is reason enough for the UZH virologist to continue researching the potentially dangerous viruses, not least since due to migration and travel the problem is not restricted to South America.”

But there is probably no reason to freak about this particular flu at the moment. Scientists say they are not aware of any human cases, but that’s not to say there aren’t any. Remember, we still have a lot to learn about it.

One thing is certain: if this disease is confirmed a legitimate zoonotic transmission, all it is going to take is one sick bastard coughing and sneezing in an airport somewhere to launch a global pandemic. This is where the shit will hit the fan, as it could lead to an explosion of lung-hacking carnage that rivals whatever the hell is going on with those zombie deer in the heart of the redneck jungle.