Calling All BBQ Lovers: Every Cut Of Pork Explained 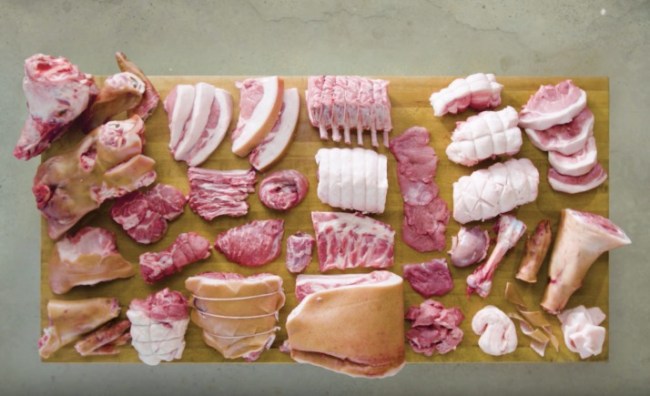 Before I get to talking about how pork is greatest tasting food on the planet, I do want to acknowledge that the content in the video below might be a little graphic for any vegans out there. This is a full explanation of each cut of pork found in a pig, and it’s also a tutorial from Bon Appétit on how to butcher an entire pig.

Pork/Pig has ALWAYS been the king of BBQ. It wasn’t until BBQ moved from The South to Texas generations ago that Beef was introduced as a main staple in barbecue cuisine. If you are serious about BBQ, it’s important to learn each and every part of the pig so you know what you’re working with and the best ways to season/rub/smoke/cook that meat:

Moving on, pork is life. Bacon is one of those foods (like pizza) that’s so fucking perfect people get hated on for saying they love bacon/bacon is their favorite food because the fact of the matter is EVERYONE who eats bacon loves bacon. Pulled pork, pork sausage, pork ribs…These are 3 of my 5 favorite BBQ foods (the other two are beef brisket and beef spare ribs). Ever since I got a wood-fire Traeger Tailgater Smoker ($411 on Amazon) 12 months ago I’ve been smokin’ BBQ at home literally every week.

If any of you bros out there have any wood-fire smoker tips for me then I’m all ears. I’ve spent an exhaustive amount of time on wood pellet smoker forums but I prefer to talk BBQ person-to-person. So hit me up in the comments if you’ve got any awesome smoker recipes you think need to be featured here!