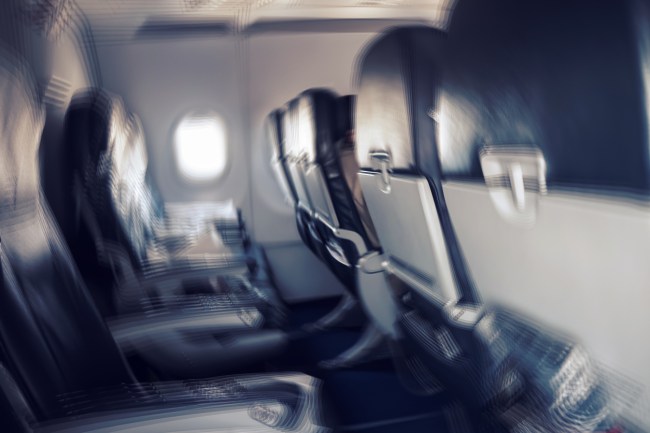 It is sort of ironic that noted aviation legend and germaphobe Howard Hughes revolutionized commercial air travel back in the day, yet somewhere in his grand design to put people at ease about being shuttled through the sky at shit-yourself altitudes, he failed to implement a Bubble Boy class, or at bare minimum some kind of contagion destruction device to protect passengers against the puke viruses floating around the cabin.

Nope. Unfortunately, he was too busy trying to save his own ass from microscopic mayhem to give two flying squirts about the rest of the world getting snuffed out by bacteria-infused air. We can’t say that we blame him. If Hughes were alive today, he’d probably have something similar to this to say on the matter: That’ll teach all y’all motherfuckers to call my shit the Spruce Goose!

But even with the technological advancements of the past few decades, there still haven’t been any developments in stopping the disgusting contaminants of the human body from spreading like the clap when people ride together inside an aluminum test tube thousands of feet above the ground.

Simply put, if you travel by airplane—even if only on occasion—you are more likely to contract the sniffles and squirts than those people who never let their feet leave the ground. In fact, as terrifying as it sounds, people who utilize air travel are said to be 100 times more susceptible to bugs like the cold and flu.

So, it’s almost a guarantee that if a person climbs aboard a winged vessel and encounters rows of passengers coughing, sneezing, and wheezing like victims of the Black Death, they are probably going to wake up at some point in the next few days with a sore throat—or worse, a vicious case of the yaks.

Just wait until that fucking zombie deer virus starts to spread. We’re all screwed then!

This threat is no mystery by now. It’s the reason some people amp up their vitamin intake before so much as stepping inside the terminal. Others pack hand sanitizer, face masks, and some even pray to their respective masters of the universe; they’ll do anything they can to prevent the Satanic seeds of sickness from infiltrating their bodies and wreaking havoc on them for the next couple of weeks. Considering that around 100,000 germs come flying out when sick bastards start hacking up a lung, airport dwellers need all the help they can get to avoid contamination.

However, the solution to avoid getting sick might be as easy as moving to the bedroom. No, we’re not talking about locking yourself in there away from all of these vile plagues. You just need to get more sleep.

A new study published in the Journal of Experimental Medicine finds that nothing is as effective at preventing the old immune system from getting pummeled into submission as some solid sack time.

Although not much is known about how catching forty winks allows the body to fight off the funk, scientists say those who get the appropriate amount of rest just seem to have stronger immune systems.

Without getting overly scientific about it, let’s just say that specific white blood cells in people who get more sleep are stronger than they are in the unrested. And since these are “critical to the body’s immune response,” keeping them as sharp as possible seems to be proper ammo for gunning down germy invasions.

Researchers say that people suffering from sleep disorders and conditions characterized by impaired sleep—such as depression, chronic stress, aging, and shift work”— are more likely to find themselves under the weather than their well-rested counterparts. So, take extra precautions before your next trip.

There is speculation that getting some sleep on the plane instead of watching movies or listening to music might help travelers thwart the illnesses of other passengers. This sounds a little like our “play dead” strategy, which is where you hold your breath on an airplane for as long as humanly possible—breathing only enough to prevent brain death—in hopes that those dreaded cold and vomit bugs will pass over and infect a more lively host.

Is this strategy based on any real science? Not really. We just hope like hell that it works. So far, so good!