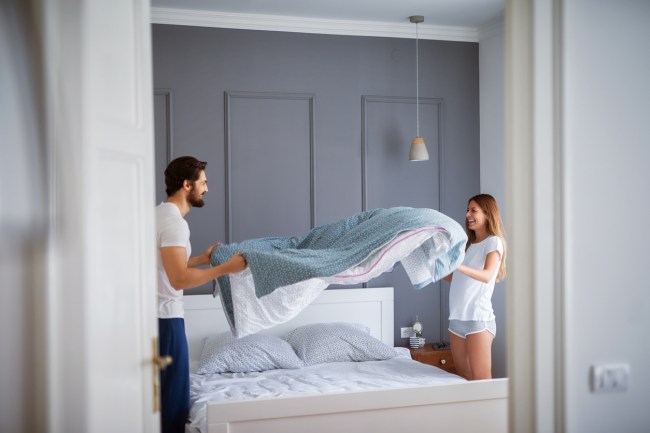 There is no denying that the male persuasion can be, at times, some of the most foul and disgusting beasts on the planet. We burp, fart, jack off like with the enthusiasm of a caged monkey, and sometimes even go days without giving our smegma-covered wieners a good splash in the tub. It almost seems as though men are genetically designed to commit atrocities of nature, to throw caution to the wind with respect to personal hygiene, like we are just too damn lazy to dig ourselves out of a sex-starved existence. Even those well-groomed dudes, that dolled-up legion of the cologne’d and coiffure’d often referred to as pretty boys, are revolting mongrels sleeping on filthy bed sheets and walking around in dirty drawers, according to science.

Although there is nothing quite like jumping into a bed with clean sheets and pillowcases, you might be surprised to learn that most guys do not change their bedroom linens as often as they should. A recent survey from Mattress Advisor shows that the average man sleeps on the same sheets for about 11 days – even if some of those nights were spent laying peter tracks along the poontang railroad.

But wait, it gets worse.

Researchers also found that in the event of a one night stand – perhaps with some chain-smoking barfly who cons you into taking her home on the promise that she will gnaw on your taint like a rabid honey badger — most guys will let their linens marinate in a mess of masculinity and masochism for up to 18 days before doing a wash. Some will even continue to eat in bed after this madness.

The results reveal what most of us have known for a long time – that men are dirty creatures who couldn’t care less about passing out face down every night in the raw dog remnants of a random sexual encounter. For some of us, at least those with severe, deep-seated issues — the lingering odors, random clumps of pubic hair and various traces of this and that is a nice reminder that we still have what it takes to get laid from time to time. It’s the next best thing to watching the video. Wait, uh, never mind.

While we can certainly appreciate one’s desire to bed down in sex dandruff for a few nights to give the old self-esteem a boost, health experts say sleeping on dirty sheets mite be a nasty habit to get into – even if regular sex isn’t a factor.

Somewhere around 1.5 million mites are crawling around your bed on any given night, and these little monsters, which can make allergies worse and create problems with the human immune system, feed on dead skin during those hours of slumber. Failing to wash your sheets regularly – let’s just go with once a week for starters – allows these little boogers more time hump and multiply, allowing fiending masses to feed off your body parts every night. There is also a potential for bed bugs, which also feed on humans, when linens fail to make it into a regular wash… with hot water and a little bleach wouldn’t hurt either. Just sayin!

The loathsome habits of men go way beyond just failing to clean their sheets. Some of us seem to think that walking around in the same pair of underwear for days on end is an appropriate way to live our best life. In fact, a study published a few years back by the University of Maryland found that nearly 30 percent of us believe it is okay to wear the same underpants a couple of days in a row. The thought process seems to be that as long as we are taking a shower, recycled drawers are good to go. 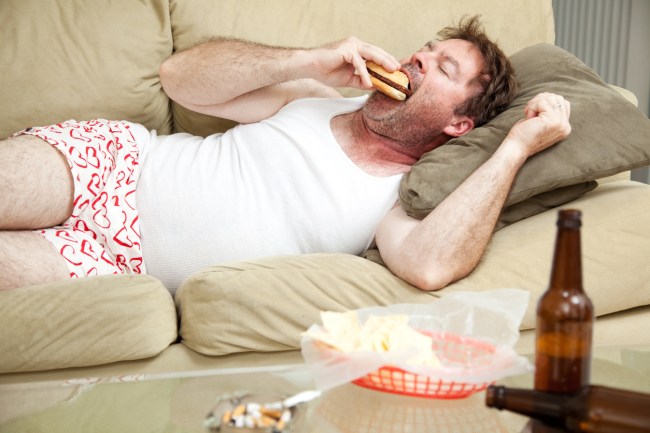 Although this might sound good in theory, the reality is that even the cleanest man on the face of the planet is still collecting all sorts of gross bacteria in their shorts during the day. This includes bacteria from fecal matter, which can increase the risk of catching E. coli. There are also bugs that accumulate in a dude’s unmentionables that have been known to produce staph infections – which can be deadly. Let’s face it, no man in his right mind wants to check out of this world from staph to the dick. Fuck all of that.

In short, health experts say men shouldn’t count on the smell test to determine whether it is time to change their underwear. Put on fresh pair every day. That means some of you geniuses need five more pairs.