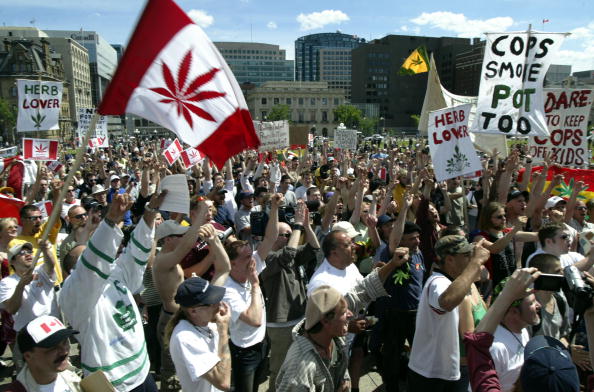 Canada’s Senate approved a historic bill to legalize recreational use of marijuana nationwide. On Tuesday night, the Canadian Senate voted 52-29 to pass Bill C-45, commonly known as the Cannabis Act. The bill is expected to get approval from the Royal Assent this week for the final step to be officially passed. Then Canadians will be able to enjoy weed within a few months. Luckies!

Canadian provincial and territorial governments will need eight to 12 weeks to publish regulations as well as license producers and retail locations to be able to sell marijuana. Canada becomes just the second country in the world to legalize marijuana. That’s right, Canada is only the second nation and first G7 country to legalize pot. The first country to legalize cannabis nationwide was Uruguay, which began selling cannabis last year.

The bill will allow anyone over the age of 18 to possess up to 30 grams (one ounce) of marijuana. Canadians will be allowed to grow up to four cannabis plants at home and permitted to order marijuana online from federally licensed producers. Dried marijuana or cannabis oils will be legal initially with edibles being legalized within a year of the bill being passed. The government needs extra time to set regulations for edible cannabis food products. Criminals who sell marijuana to a minor could face a penalty of jail for up to 14 years.

Marijuana possession first became a crime in Canada in 1923. Medical marijuana use has been legal in Canada since 2001. In 2015, Canadians were estimated to have spent approximately $4.5 billion on weed, nearly as much as they did on wine. The Canadian government is set to capitalize on the devil’s lettuce by taxing the sales of marijuana, which has a $7 billion illegal market in Canada. Plus, the country will spend less on policing the previous drug laws and will receive tourism stemming from kush. Congratulations Canadians.