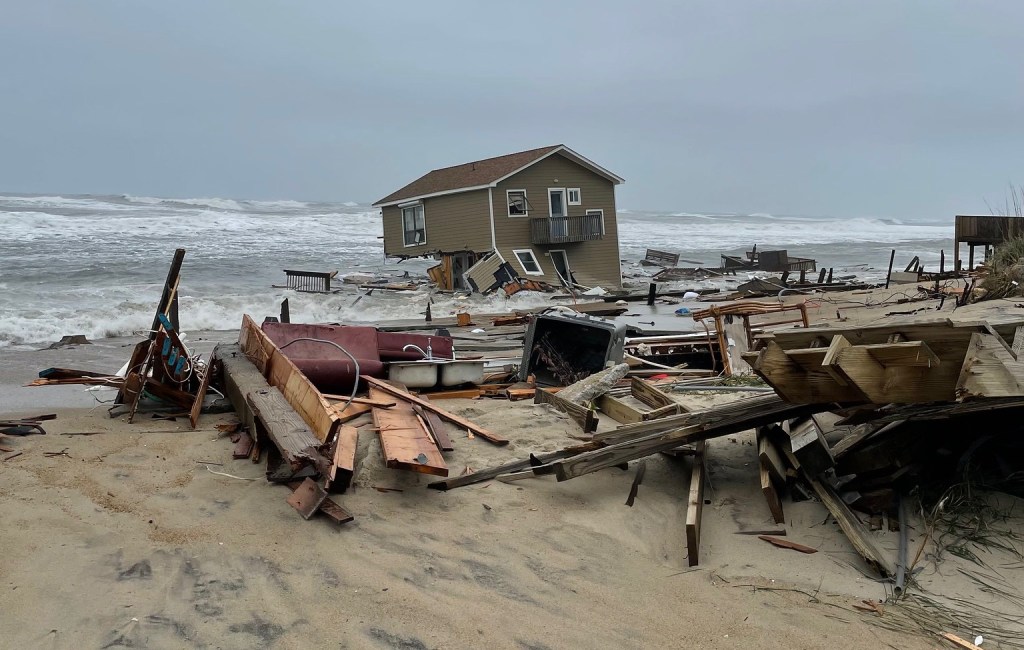 Tuesday brought brutal weather conditions to the Cape Hatteras National Seashore in North Carolina. By early afternoon, there had been reports that TWO houses had collapsed into the ocean due to destructive high tides with 16-foot waves and powerful winds.

The official Cape Hatteras National Seashore Twitter account shared a video of a house collapsing in Rodanthe, North Carolina. This was the second house of the day to collapse into the ocean and it’s pretty wild that someone was there with recording at the exact moment the house’s stilts broke and it was swallowed by the sea.

As early as Sunday, the Cape Hatteras National Seashore Twitter account was sharing warnings that water front level forecasts were concerning and everyone should expect beach impacts in the coming days. But I don’t think anyone expected sixteen-foot waves and hellacious wind battering homes so badly that there were two Cape Hatteras houses collapsing in the same day.

Cape Hatteras National Seashore (Seashore) has confirmed that an unoccupied house at 24265 Ocean Drive, Rodanthe, N.C. collapsed this afternoon. This is the second unoccupied house collapse of the day at the Seashore. Read more: https://t.co/ZPUiklQAWA pic.twitter.com/OMoPNCpbzk

Shortly after this video started going viral, ‘Zillow’ began trending on Twitter after people looked up details and discovered that the house was estimated to be worth $381,200.

An unoccupied house on stilts in Rodanthe, North Carolina, as it collapses into the ocean this afternoon.
Was worth $381,200 according to Zillow. pic.twitter.com/RxkgOkBIv0

Here’s what it looked like before it washed away into the ocean:

Before it was claimed by the sea. pic.twitter.com/E9MtUGOn8M

Can’t help but wonder what is going to happen to those other houses next to the collapsed home. They’re just as close to the ocean and just barely protected by the beach.

It’s interesting that ‘Zillow’ was trending and not ‘Climate Change’ because half of the tweets in the mentions are talking about climate change.

While you aren't wrong with your statement in general, if you look at this house, you can clearly see it collapses due to not following the NC law requiring houses to be have a minimum setback distance of 75 feet during high tide. That house is clearly way closer to the water.

Anyone else immediately think of A Series of Unfortunate Events pic.twitter.com/m1Lt0ElkiT

This what I thought of pic.twitter.com/gmejybFdNY

Here’s a look at the first house to collapse on Tuesday morning:

Here’s what the roads looked like in Cape Hatteras to give you a sense of how high the tides were and how destructive the winds have been for several days:

Unfortunately, this afternoon's high tide is bringing worsening conditions to N.C. 12. As a result, the highway will REMAIN CLOSED from Oregon Inlet to Rodanthe for the rest of the day today into tomorrow. Crews will continue to work to get the road reopened as soon as possible. pic.twitter.com/A96p1yOeRf

NC12 remains CLOSED between Oregon Inlet and Rodanthe. The last high tide brought more overwash and sand to the road at the Pea Island Visitor Center and the S-Curves. Our crews are out working now, but it's too early to tell if we will be able to reopen to traffic today. pic.twitter.com/uOtq14AW2r

Footage of this Cape Hatteras house collapse is startling. I grew up on an island in Florida and constantly worry about whether my childhood memories will disappear like this house if one powerful storm comes through.